The Inbox #10: How Do We Identify a False Prophet?

The ultimate challenge in spiritual discernment is to put to the test those people who claim they are, as the Apostle Peter described, “holy men of God who spoke as they were moved by the Holy Spirit” (2 Peter 1:21). Did they really receive messages from God about the future? Let’s find out!

Signs of the End Times

Jesus in His Olivet Discourse warned that in the end times false christs and false prophets will rise and show great signs and wonders to deceive. Three times in Matthew 24 Jesus made that warning. Therefore, His number one sign that would point to His soon return was that there would be a proliferation of false prophets. He warned, “Watch out for false prophets. They come to you in sheep’s clothing, but inwardly they are ferocious wolves” (Matthew 7:15). These false prophets would multiply as the Church fell deeper into spiritual apathy (Revelation 3:14-22). The Apostle Paul described this as a time when men will not put up with sound doctrine. Instead, to suit their own desires, they will gather around them a great number of teachers to say what their itching ears want to hear (2 Timothy 4:3).

Put to the Test

Moses provided the test. A true prophet can be distinguished from a false prophet based on the accuracy of their prophecies.

“You may say to yourselves, ‘How can we know when a message has not been spoken by the LORD?’ If what a prophet proclaims in the name of the LORD does not take place or come true, that is a message the LORD has not spoken. That prophet has spoken presumptuously. Do not be afraid of him” (Deuteronomy 18:21-22).

Therefore, a prophet of God has to be accurate 100% of the time.

By Any Other Name

Besides the test of a prophet’s predictions having to come true 100% of the time, a second test was provided by the Apostle John (1 John 4:1-3). In order to test the spirits, so to speak, the prophet has to acknowledge that for Jesus Christ to have come from God, He must have first come in the flesh. A true follower of Jesus acknowledges that the Son of God came to earth as a man in the flesh.

There are other types of tests that can be given to discern a false prophet. Notice if:

Now let’s put a prophet to the test! Look at the picture below of a modern-day prophet. Using the tests we’ve covered, identify whether he is a true or false prophet. 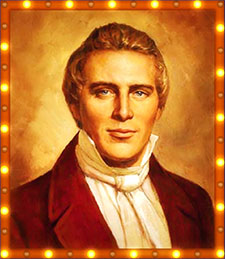 That is Joseph Smith, the founder of the Church of Jesus Christ of the Latter Day Saints, better known as the Mormons. He added a whole other book to the Bible, calling it the book of Mormon. Sure, he acknowledged that Jesus came in the flesh, but claimed that Jesus was the spirit brother of Satan! He claimed that one day we are all going to become gods. He had even made a number of dated prophetic predictions about men going on mission trips that never happened, churches to be built that never were, described battles which never took place, and even claimed the Native Americans were Jews, which they are not.

Using those biblical tests, you surely were able to spot a fox in the hen house with Joseph Smith. The tests can also be used for other so-called prophets.

For example, there was Charles Taze Russell who founded the Jehovah’s Witnesses. He prophesied the world would end in 1914. Then there was Jeane Dixon, a psychic lady who proclaimed a woman would become president in the 1980s. And don’t forget the three dates Harold Camping predicted Jesus would be coming back.

So, remember, follow these simple tests and you too can identify a false prophet and become a champion of spiritual discernment!

For further information, please read “The Danger of False Prophets”.