The Author of Creation and Our Soon-Returning King

As we turn the page to begin another new year, it is fitting that we go back to the beginning with a focus on Creation and the Creator. From the first verses of Genesis to the end of Revelation, the history of the world really is His story. That is why examining the Creation account lays an important foundation for Bible prophecy.

The foundations of the entire gospel message are laid in just the first three chapters of Genesis. The Bible tells us that God created the heavens and the earth, declared them good, and appointed man — made in His own image — to rule over the natural order. When man’s subsequent disobedience led to his downfall, God provided a sacrificial covering for man’s shame in the third chapter of Genesis. He also foretold the final sacrifice that would cover over his sin forever (Genesis 3:15).

We accept that truth by faith. As the writer of Hebrews recognized, “By faith we understand that the worlds were prepared by the word of God, so that what is seen was not made out of things which are visible” (Hebrews 11:3). Multiple New Testament writers further specify the Son as the agent of Creation — acting on the will of the Father.

A Seismic Shift in Belief

For many centuries, Christendom recognized the Sovereignty of God and the Lordship of Jesus. And because it believed in the factual authority of the Bible, it accepted the validity of the biblical account of Creation.

But late in the 19th century, the western world became enamored with its own enlightenment. Too wise in its own estimation to remain grounded in biblical truth, it rejected God’s account of Creation for a fanciful theory of atheistic origin based on eons of time, random chance, and widespread death.

This sad state of affairs is a fulfillment of Bible prophecy as foretold by the Apostle Paul. In Romans 1, he recognized the age-old pattern of humanity’s rejection of truth and foretold its tragic ramifications:

18) For the wrath of God is revealed from
heaven against all ungodliness and unrighteousness
of men who suppress the truth in
unrighteousness,

19) because that which is known about God is
evident within them; for God made it evident
to them.

20) For since the creation of the world His
invisible attributes, His eternal power and
divine nature, have been clearly seen, being
understood through what has been made, so
that they are without excuse.

21) For even though they knew God, they did
not honor Him as God or give thanks, but they
became futile in the speculations, and their
foolish heart was darkened.

22) Professing to be wise, they became fools,

23) and exchanged the glory of the incorruptible
God for an image in the form of corruptible
man and of birds and four-footed animals
and crawling creatures.

24) Therefore God gave them over…

What did He give them over to? To lusts and impurity, degrading passions, and a depraved mind (verses 24-26). A glance at the news of the day will demonstrate that our society has indeed been given over!

An Age of Deception

That last “giving over” explains the current susceptibility of the world to false doctrines and God-denying theories like evolution. What is most surprising is the willingness of so many within the church to embrace the lie of evolution over the Word of God. Once again, in 2 Timothy 4, Paul foretold this inclination even among those who call themselves Christians:

3) For the time will come when they will not
endure sound doctrine; but wanting their ears
tickled, they will accumulate for themselves
teachers in accordance to their own desires,

That is exactly what has happened — and that growing apostasy is a dramatic sign of the times pointing to the Lord’s soon return. Many churches refuse to teach Creation because they are ashamed that it contradicts the world’s evolutionary theories. And, as every public school and our culture in general bombards young people with an evolutionary worldview, teens tend to be dismissive of occasionally presented Bible stories.

Ungrounded in biblical truth and forced to choose between these conflicting truth claims, research demonstrates that many teenagers are “already gone” from the Christian faith even before they leave home for college. ( A book by that title written by Ken Ham & Britt Beemer documents this sad reality.)

The tendency to stray from biblical truth is nothing new. The people of Israel were judged by God because they rejected Him and followed other gods and false teachings. The writer of Kings declared, “They followed vanity and became vain” (2 Kings 17:15). Or, put another way, they followed foolishness and became foolish.

As the world lurches toward the Day of the Lord, the great deceiver has redoubled his efforts. He is eager for many to stray from the truth — for when they do they wander from the Savior. And, since Jesus was the person of God who facilitated Creation, the effort to discount biblical Creation is really an attack on Him as Creator. Evolution is a lie meant to discredit God.

So what can we do to resist this lie?

We must instill this truth in our children and grandchildren. If you feel inadequate to that task when it comes to refuting the deception of evolution, realize that ministries like Answers in Genesis and the Institute for Creation Research have wonderful resources to raise up the next generation in biblical truth.

Just as he wants to discredit God’s account of Creation, Satan is also spreading lies about the end of times. He has convinced much of the world that Jesus is not coming again, or at least distracted people from recognizing the signs pointing to His soon return. But the Word of God tells us otherwise. In Revelation 21:5, He who sits on the throne says, “Behold, I am making all things new…These words are faithful and true.”

Having trusted in Jesus, the Holy Spirit testifies to our own spirit that He is coming soon. Most of you reading this magazine will testify that you long for his arrival. The Bible says that all of Creation also longs for that glorious day when He will return to this world and restore it to its glorified perfection (Romans 8:19-22).

One last word of caution. Speaking of the idolaters of old, Isaiah wrote, “He feeds on ashes; a deceived heart has turned him aside. And he cannot deliver himself, nor say, ‘Is there a lie in my right hand?'” (Isaiah 44:20) Even as we resist the deception being foisted upon the world, let’s remember to have compassion for the deceived. Jesus wept for those steeped in falsehood 2,000 years ago — and died for them too.

Join me in praying that the Holy Spirit will move on dark and hardened hearts — melting them so they can receive the truth. In the end, Truth is a person — Jesus — who also provides the way to eternal life (John 14:6). He said of Himself, “I am the Alpha and the Omega, the first and the last, the beginning and the end” (Revelation 22:13).

Jesus was the Author of Creation who spoke the universe into being, beginning with “Let there be light.” So as the world turns away from Him and descends into darkness, we can trust and proclaim His final promise: “Yes, I am coming quickly” Revelation 22:20). 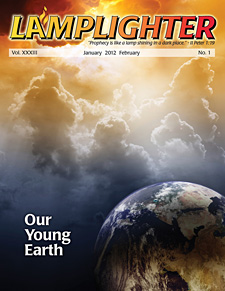