The dangers of the “seeker-sensitive,” man-centered Gospel. 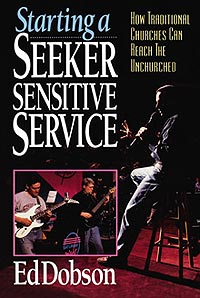 “But even if we, or an angel from heaven, preach any other gospel to you than what we have preached to you, let him be accursed.” (Galatians 1:8)

Though few seem to realize it, Satan has been in the “another gospel” business for a long time. His goal, since the glorious good news of the gospel of Jesus Christ burst onto the world scene nearly 2000 years ago, has always been to produce a counterfeit gospel, which would replace the true, and keep men in darkness and spiritual slumber.

In the early days Gnosticism suited his purposes well. The early church found itself in a battle for its theological life, as this heresy rose up and persuaded many that Christ was a spirit-being and had not truly come in the flesh, or truly died on the cross. Paul’s epistle to the Colossians is a strong refutation of this ancient heresy, and serves as a continual warning to believers throughout the ages to “beware, lest anyone cheat you through philosophy and empty deceit, according to the tradition of men, according to the basic principles of the world, and not according to Christ” (Colossians 2:8).

Though the Gnostic fallacy has come and gone, Satan’s attempts at deluding the church are as vigorous as ever. In today’s self-preoccupied generation, one of the most prominent counterfeit gospels is the one which centers around man and interprets all Scripture in the light of potential benefits to man.

Technically, this approach is called the anthropocentric gospel or, more simply, the man-centered gospel. It is a form of theological humanism, and has made major inroads into the evangelical church. It does not deny the basics of the faith: Christ’s sinless life and His death and resurrection. Rather, it sheds a new light on these things by focusing almost exclusively upon man’s comfort, pleasure, and success. Let us consider some of the differences between a man-centered and a Christ-centered gospel.

Traditionally, salvation has been seen as relating to sin and righteousness. The Bible plainly teaches us that all have sinned and are in need of a Savior (Romans 3:9-18). We are told that God is “of purer eyes than to behold evil, and He cannot look upon iniquity” (Habakkuk 1:13). Man is said to have gone astray like a wayward sheep and turned to his own way (Isaiah 53:6). All our best efforts at impressing God by our good works and noble intentions appear as filthy rags in the sight of a holy God (Isaiah 64:6). Since the reformation, this has been the standard evangelistic presentation of the gospel by the evangelical church.

Today, in many quarters, professing Christians have decided that the world is no longer interested in such antiquated notions as sin, righteousness, and justification. We must keep up with the times, and so salvation is now being presented as an experience with Christ which will fulfill us, make us happy, and give us the tools we need to be successful in life. From “If any man will come after me, let him deny himself take up his cross, and follow Me,” we have degenerated to, “If any man would like personal fulfillment, high self-esteem, and be rid of all feelings of inferiority, let him deny himself nothing, take up a positive self-image, and be happy always.”

This folly has crept into our “evangelism” to the extent that Christians think they have witnessed to a person when they have told him that Jesus would improve his life, though they have said virtually nothing about sin, repentance, or man’s need for the righteousness of Christ.

What kind of gospel is this that neglects the cardinal doctrines of the faith, and focuses instead on promises of a blissful life which can only lead to disillusionment? Is this the same gospel Paul spoke of in 1 Corinthians 15:19 when he said, “If in this life only we have hope in Christ we are of all men most miserable”? Is this what Peter referred to in 1 Peter 4:13 when he said, “Rejoice to the extent that you partake of Christ’s sufferings, that when His glory is revealed, you may also be glad with exceeding joy”?

If the man-centered understanding of salvation is warped, what its advocates do with the cross of Jesus is absolutely appalling. The problem is not that they deny the cross; it is the meaning they attach to it, and the conclusions they draw from it.

Traditionally the cross has always been seen as the ultimate demonstration of God’s love for mankind. Christians over the centuries have beheld our Savior on the cross, dying that torturous death, bleeding from his hands, feet, and side, and have been struck with awe and amazement at the incredible love of God. The thing that made it the most amazing was the fact that “while we were yet sinners, Christ died for us” (Romans 5:8).

Amazing grace has lost its appeal these days. In our zealous headlong rush to prove our own self-worth and convince ourselves of how marvelously valuable we are, the cross has gained a new humanistic interpretation. No longer is it a reflection of God’s amazing love for sinners; rather it is a declaration of our personal value. Cecil Osbourne has declared, “There must be something truly wonderful about us if God can love us and accept us so readily.”

Has Christianity been reduced to this? How appalled the fiery reformers and revivalists would be to see such a perversion of the meaning of the cross. Martin Luther almost seemed to see this day coming when he wrote his fourth thesis: “God does not love us because we are valuable; we are valuable because God loves us.” To look at the cross and say, “Jesus died for me, am I not wonderful?” is to utterly pervert the meaning of grace. The proper declaration is, “Jesus died for me; is He not wonderful?”

If we were truly such wonderful prizes, fully worthy of Christ’s death on the cross, there would be no amazing grace. You might call it routine grace, or expected grace, or perhaps you might just call it smart purchasing. Such is the folly of those who would turn the cross of our Savior into an excuse for self-glorying.

Accordingly, many Christians seem to be under the impression that God has established faith as a means for us to receive all the desires our flesh could wish. It matters not whether what we want might be good for us, or even whether it might be the will of God just turn your faith loose and get whatever you want. We are “the King’s kids,” and we should have everything we want.

The ultimate man of faith, of course, was Jesus Christ. He had faith to spare. With a word of His mouth sicknesses were healed, the dead were raised, storms were stilled, and demons cast out. When He stood before the tomb of Lazarus, He had the audacity to pray, “I thank you Father, that you have heard Me, and I know that You always hear Me…” (John 11:41,42).

If ever a man could be said to be a man of faith, it was Jesus. And yet Jesus never used His faith to get whatever He wanted. He declared that “The Son can do nothing of Himself, but what He sees the Father do…” (John 5:19). When tempted by Satan to use His faith to turn stones to bread on His own initiative, He would have none of it (Matthew 4:3-4).

Faith is not a tool for getting anything we want. If it were, James would not have had to write, “You ask and do not receive because you ask amiss, that you may spend it upon your pleasures” (James 4:3). Jesus used His faith for enforcing the will of God on the earth. He went through life as One who was not His own, doing the will of the Father, saying what He heard the Father say, and doing what He saw the Father do.

I have found that there is a lot less strain involved in believing God for something that you are convinced is His will, than reaching for things that are either against His will or that He seems to have no real interest in your having.

Let me conclude by emphasizing that there most certainly are benefits in knowing Christ. Eternal life, the forgiveness of sins, righteousness, inner peace, and joy in the Holy Spirit are all promised those who will put their faith in Christ. Nor is it wrong to speak of these benefits to sinners.

The problem comes when, in our eagerness to appropriate all that God has for us, we lose sight of the One who is our shield and our exceedingly great reward, the Lord Jesus Himself. He does indeed promise to meet our needs and answer our prayers, but He asks that we fulfill His condition: to abide in Him.

As we yield our lives to His service, and become set apart as vessels fit for the Master’s use, we will walk in a fearless faith that establishes the will of God on the earth, and we will glory in the cross, not for what it shows us about our value, but for what it reveals of the deep, deep love of Jesus. 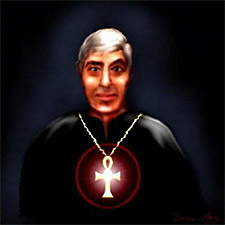 The Spiritual Environment of the Last Days