Home > Articles > Does the Rise of ISIS Point to a Muslim Antichrist?

Absolutely not! The idea of a Muslim Antichrist is both un–biblical and illogical. I have written extensively and in detail about The Muslim Antichrist Theory, but I will dispense of it here with four brief points.

1. The concept of a Muslim Antichrist is unbiblical because Daniel 9:26–27 says that the Antichrist will come from the people who will destroy Jerusalem.

The devastation spoken of in this passage took place in 70 AD, and it was done by the Romans. So, the Antichrist will come out of the area of the Roman Empire and will be Roman by descent.

The leading advocate of the Muslim Antichrist idea did not even mention this verse in his first book! Either he did not know about it, or he simply decided to ignore it. When it was brought to his attention, he and his followers responded by claiming that the Roman armies that destroyed Jerusalem were conscripts from the Middle East, where Islam developed some 500 years later. First, this is not true, and second, even if it were true, it would be irrelevant. The fact is that the armies were under the control of a Roman general who was taking orders from the Roman Senate in Rome.

2. The idea of a Muslim Antichrist is illogical because the Scriptures say that the Tribulation will begin when the Antichrist signs a treaty with Israel that will guarantee that nation’s safety.

What Muslim would guarantee the peace and safety of Israel? What Israeli leader would put his trust in a Muslim leader, knowing that Muslims make “peace” treaties only for the sake of convenience?

3. The Muslim Antichrist concept is absurd when you consider the fact that the Scriptures teach that the Antichrist will go to Jerusalem in the middle of the Tribulation, enter the rebuilt Jewish Temple, and declare himself to be god.

No Muslim would ever declare himself to be God. This would violate the most basic tenets of Islam. And if he were to do so, he would be immediately killed by Muslims!

4. The rise of a Muslim Antichrist would be impossible because no Muslim armies will exist in the Middle East when the Tribulation begins.

The war of Psalm 83 between Israel and its surrounding Arab nations with whom it has a common border will result in an overwhelming victory for Israel (Zechariah 12:6–8), and will likely result in the total devastation of Damascus (Isaiah 17:1–14 and Jeremiah 49:23–27).

The subsequent Russian invasion of the Jewish State, together with a coalition of Muslim armies from the outer circle around Israel — portrayed in Ezekiel 38 & 39 — will result in God Almighty destroying all the invading forces upon the mountains of Israel (Ezekiel 38:18–23 and 39:1–6).

I believe the Scriptures indicate that both of these wars will occur before the beginning of the Tribulation. Thus, when the Tribulation begins, the Muslim nations of the Middle East will be in shambles, devoid of any military power.

When the Roman Antichrist takes over, he will launch a military campaign to conquer the world. The Bible says that in the process one-half the world’s population will die in the first three and a half years of the Tribulation as the war morphs from a traditional one (Revelation 6) into a nuclear one (Revelation 8–9).

The people most likely to strongly resist the European Anti-christ and his one world religion would be the Muslims outside the Middle East — the Muslims of Indonesia, India, Bangladesh and Pakistan — who constitute the majority of Muslims in the world. Thus, I believe God will use the Antichrist to pour out His wrath upon the Muslim world — another reason why I do not believe the Antichrist will be a Muslim. 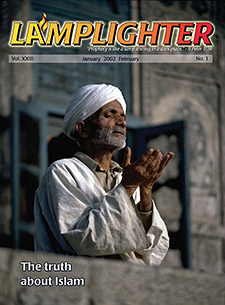 The Truth About Islam