One of the many signs that we are living in the end times is the epidemic of homosexuality that is sweeping the world today.

Jesus said He would return at a time when society resembled “the days of Noah” (Matthew 24:37). The Old Testament tells us that in the time of Noah “the earth was corrupt in God’s sight” (Genesis 6:11). The New Testament reveals in stark detail the nature of that corruption.

The Nature of Noah’s Age

The description of Noah’s society is found in chapter one of Romans. Paul writes that the society was characterized first of all by the rejection of God and the worship of Man (Romans 1:18-25). Because of this stubborn and foolish rejection of their Creator, God “gave them over in the lusts of their hearts to impurity,” and there was an outbreak of sexual immorality (Romans 1:24). 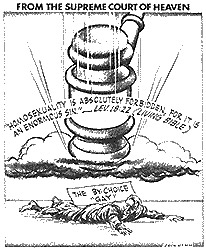 When they still refused to repent, God “gave them over to degrading passions,” and there followed an epidemic of homosexuality in which “women exchanged the natural function for that which is unnatural” and men likewise “abandoned the natural function of the woman and burned in their desire toward one another” (Romans 1:26-27).

Does this sound familiar? It should. It is a vivid description of the moral decline which the world has experienced in this century. We have gone full circle. The society of Noah has reappeared, and it is characterized by the kind of ungodliness and wickedness which provokes the wrath of God (Romans 1:18).

There are those who argue that the Bible does not condemn homosexuality. That is sheer nonsense. Homosexuality is condemned as a sin against God in both the Old and New Testaments. It was one of the sins for which the cities of Sodom and Gomorrah were destroyed (Genesis 19). It was specifically singled out in the Mosaic Law as “an abomination” (Leviticus 18:22). In fact, the Mosaic Law prescribed the death penalty for such activity (Leviticus 20:13).

In the New Testament Paul specifically condemns homosexual activity. He says it is unrighteousness and that it will keep one from inheriting the kingdom of God: “Do not be deceived: neither fornicators, nor idolaters, nor adulterers, nor effeminate, nor homosexuals, nor thieves, nor the covetous, nor drunkards, nor revilers, nor swindlers, shall inherit the kingdom of God.”

In his first letter to Timothy, Paul again refers to the sin of homosexuality. He classifies homosexuals with those who are “lawless and rebellious,” “ungodly,” “unholy and profane” (1 Timothy 1:9-10).

Many humanist Christian leaders have tried to explain away these scriptures. In the process, they have endorsed homosexuality as an “alternative lifestyle,” and they have tried to justify the ordination of practicing homosexuals. 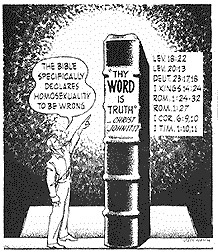 These religious leaders are caught up in spiritual darkness. They are the type referred to by Paul when he wrote: “Though they know God’s righteous decree that those who do such things deserve death, they not only continue to do these very things but also approve of those who practice them” (Romans 1:32).

They then add insult to injury by asserting that homosexuality could not be all that bad because Jesus never condemned it. What a pitiful argument! That’s like saying there is nothing wrong with child molestation, incest, or bestiality because Jesus never specifically condemned these sexual perversions.

The Viewpoint of Jesus

The fact is that Jesus had a lot to say about sexual morality, and what He had to say clearly rules out homosexuality as an acceptable lifestyle before God.

In other words, Jesus clearly taught that the only moral sexual relationship is the one that occurs within marriage.

Increasingly, the homosexual community is responding to criticisms of its lifestyle by arguing: “We are born as homosexuals. Being homosexual is as natural as being left handed. We have no more choice about our sexual orientation than a person has about his skin color. We should therefore be given special civil rights protection like other minority groups.”

It sounds good. But it is a lie of Satan. The Word of God places no condemnation upon a person’s sex, skin color, or national origin. In fact, the Bible says that “God is no respecter of persons” (Romans 2:11). But the Bible clearly condemns a sexual preference for a person of the same sex. Would a loving God who sent His Son to die for the sins of the world condemn someone for something they have no control over? The answer is obvious.

Furthermore, there is no credible scientific evidence whatsoever that sexual preference is genetically determined like skin color. Several scientists have made the claim, including some recently, but none of their studies have stood the test of scientific investigation. In fact, all the evidence points to the fact that homosexuality is a lifestyle choice.

Certainly there are people who seem to be naturally tempted by a person of the same sex. Such temptation derives from the sin nature that all of us are born with. But that does not mean that giving in to the temptation is okay. After all, people with a normal sexual orientation are often tempted to have sexual relations outside of marriage, but the Bible clearly condemns both fornication and adultery.

Homosexuals also like to respond to their critics by arguing that the scientific community has declared their lifestyle to be “normal.” In this regard they point to the decision that was made by the American Psychiatric Association in 1974 to remove homosexuality from its list of pathological psychiatric conditions.

It is true that the APA took such an action, but what is not so well known is the fact that the action was entirely political in nature and not motivated by any new scientific discoveries. This became evident in later surveys of the members of the association. Those surveys showed that the majority of the APA membership still viewed homosexual behavior as pathological. And four years after the vote, another survey revealed that 69% of psychiatrists still believed that homosexuality “usually represents a pathological adaptation.”

Another response of homosexuals to their critics has been to label them “homophobic.” This is a very effective response, because no one wants to be accused of being prejudiced.

But a phobia is an irrational fear. Is it irrational to fear homosexuals? I think not. They are carriers of deadly diseases. They are determined to destroy the God ordained concept of the family. And the Bible teaches that their unchecked presence in any society will ultimately result in God pouring out His wrath on that society. As you can see, there are some very rational reasons to fear homosexuals.

The Attack on the Family

Let’s consider for a moment the homosexual political agenda. It’s a radical one that most people are not really aware of. If enacted, it would serve to undermine the Biblical concept of the family.

The first goal, of course, is to repeal all state laws against sodomy. Until 1961 every state in the Union had a law against sodomy. Since that time, state after state has repealed its anti-sodomy law due to pressure and threats from homosexual activists and organizations like the ACLU despite the fact that the Supreme Court has consistently upheld the constitutional right of states to pass such laws.

Another goal high on the political agenda is to get special laws enacted that would prohibit any kind of discrimination against homosexuals. The proposed laws are broad in scope. Some would prohibit a person from refusing to rent a room in his home to a homosexual. Others would go so far as to penalize a church for refusing to hire a homosexual, and organizations like the Boy Scouts would be required to recruit homosexual leaders. The most ominous laws are those that would classify verbal attacks on the homosexual lifestyle as “hate crimes.” The latter laws could be applied to media ministers as well as preachers in the pulpit.

Pressure is mounting from homosexual activists groups and their allies (the ACLU, the NEA, and NOW) for the legalization of homosexual marriages. Certain other demands go hand in hand with this one. One is that homosexual couples be given the same tax breaks as traditional families. Another is that such couples be given equal consideration in the adoption of children. And, of course, there are demands that the homosexual “family” be presented in the public schools as an alternative lifestyle.

Let’s take a closer look at the perverted lifestyle of homosexuals. Promiscuity is the norm. In a 1978 study, 43% of homosexuals admitted to having sex with more than 500 partners, and 28% to having sex with more than 1,000! They also revealed that most of their sexual partners were anonymous persons with whom they had sex only once. A 1981 study found that only 2% of homosexuals are “near monogamous” meaning that they had 10 or fewer sexual partners in a lifetime. 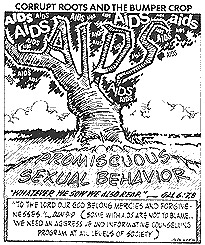 The sexual practices of homosexuals are even more appalling. The Institute for the Scientific Investigation of Sexuality reports:

Satan has attempted to disguise the sinfulness of homosexuality by having it dubbed “the gay lifestyle.” But God will not be mocked. The Bible teaches that we reap what we sow (Galatians 6:7).

The Apostle Paul says that homosexuals suffer the consequence of their sin by “receiving in their own persons the due penalty of their error” (Romans 1:27). The truth of that statement has always been evidenced in the psychological suffering of homosexuals.

But the statement has taken on new significance in recent years with the sudden outbreak of specifically homosexual diseases like AIDS (Acquired Immune Deficiency Syndrome), originally known as “the Gay Plague.”

The result of their filthy sexual practices and their gross promiscuity is that the homosexual community is plagued with disease. Two-thirds of all AIDS cases result from homosexual activity, and homosexuals account for one-half of all syphilis cases even though they constitute only 1% of the population.

The most encouraging message any homosexual could ever be given is one contained in the Word of God in I Corinthians 6:9-11. This passage begins with some very bad news, but it ends with incredibly good news. The bad news is put in the following words: “Do you not know that the unrighteous shall not inherit the kingdom of God? Do not be deceived: neither fornicators, nor idolaters, nor adulterers, nor effeminate, nor homosexuals, nor thieves, nor the covetous, nor drunkards, nor revilers, nor swindlers, shall inherit the kingdom of God.”

Paul minces no words in this statement, and the impact is devastating. Homosexuals are condemned with the worst of sinners. But in the very next verse, Paul provides a wonderful glimpse of hope for the homosexual: “And such were some of you; but you were washed, but you were sanctified, but you were justified in the name of the Lord Jesus Christ, and in the Spirit of our God.”

Isn’t that marvelous? Those words were addressed to saved children of God! Paul says, “And such were some of you.” Yes, some of the Christians at Corinth had been sexual perverts, but they had been delivered from their bondage by the power of God in Christ Jesus. Their sins had been forgiven and forgotten by a God who does not wish that any should perish (Hebrews 8:12 and 2 Peter 3:9).

Like all sinners, the homosexual will find forgiveness and deliverance when he gets on his knees and repents of his sin. He will also find acceptance in the Church.

The Church has been severely criticized for having a “condemning attitude” toward homosexuals. The criticism is unjustified.

The Church cannot receive homosexuals into its fellowship when they come without repenting, demanding that the Church endorse their sin. To do so would be equivalent to the Church accepting adulterers who brag of their sexual conquests and refuse to repent. 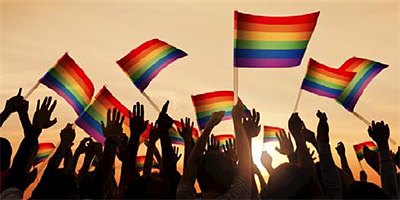