What are the end-time prophecies of Islam? 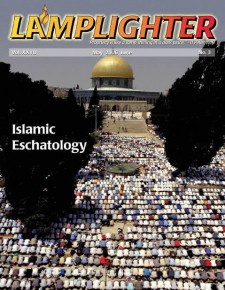 The holiest book of Islam is the Qu’ran, often spelled Koran in English. It supposedly contains statements of the Islamic god, Allah, which were given to his prophet, Mohammad, by the Angel Gabriel.

Mohammad was illiterate, so scribes wrote down what he said over a 23 year period of time, until his death in 632 AD. Much of the content of the Qu’ran was delivered by Mohammad while he was experiencing seizures that even his first wife considered to be demonic in nature. The scribes began compiling the Qu’ran shortly before Mohammad’s death. The Qu’ran is about the length of the New Testament. (Copies of the Qu’ran can be purchased at any general bookstore. An interactive copy can be found on the Internet at www.hti.umich.edu/k/koran.)

The second most sacred book of Islam is called the Hadith. It is mainly a collection of Mohammad’s sayings that were not considered to be revelations directly from Allah. The Hadith also contains stories about things Mohammad did.

The Hadith was compiled in the 9th Century, about two hundred years after the death of Mohammad. There were several compilations made during that time, but the most authoritative is considered to be the one by al-Bukhari. He collected a total of 600,000 sayings of Mohammad and stories about him (examples). These came from the writings of both friends and family members. Many came from Mohammad’s 15 wives. Al-Bukhari verified 7,000 as “genuine.” These became the Hadith. (For an interactive copy of the Hadith on the Internet, go to the University of Southern California website at www.usc.edu.)

Strangely, the Qu’ran contains very little prophecy about the end times. It mainly affirms that history will consummate with “the Hour” when the resurrection and judgment will take place. So, the Hadith is the major source of Islamic eschatology.

It is extremely difficult to piece together the Islamic concept of the end times. The information is greatly disjointed, being spread throughout the Hadith. Also, unlike Christian prophecy scholars, Islamic students of prophecy have not attempted to systematize their concepts into charts and diagrams which show how all the events are related to each other.

I have done my best to piece together all the events of Islamic eschatology, and I believe that what follows is a fair representation. But keep in mind that Islamic scholars disagree on the nature and order of some events, just as Christian experts do regarding the end-time sequence of Bible prophecy.

The most helpful source I was able to discover was a book by Dr. Samuel Shahid called The Last Trumpet. He attempts to show that the major concepts of Islamic eschatology were borrowed from the Hebrew Scriptures, the Christian New Testament, and the concepts of Zoroastrianism. Dr. Shahid is the director of Islamic studies at Southwestern Baptist Theological Seminary in Ft. Worth, Texas. (See a complete bibliography at the end of this article).

Dr. Shahid proves conclusively that Mohammad secured many of his ideas orally from Christians, Jews, and followers of Zoroastrianism. In the process he got many of the stories and principles confused. For example, the Hadith states that the mother of Jesus was Mary, the sister of Moses!

Dr. Shahid also points out that the Hadith was compiled at a time when Islamic authorities knew much more about the Bible and Christian traditions and literature. Thus, many Hadith passages were manufactured and embellished and were heavily influenced by Christian sources.

Hadith passages concerning the end times are highly contradictory, and thus it is difficult to nail down a lot of specifics. Only a general outline of end time events can be compiled.

The Islamic Signs of the Times

There are both minor and major signs that point to the climactic event in Islamic eschatology — namely, “the Hour,” which is the time of resurrection and judgment. There is a Second Coming of Jesus in Islamic end time events, but it is not considered to be the decisive event. Rather, it is viewed as a sign pointing toward “the Hour.” The beginning of the end times is marked by the appearance of the Antichrist, who is called the Dajjal.

As with the Christian Scriptures, the order of the major end time events is not always clear in the Qu’ran and Hadith, and therefore, in Islamic tradition they are placed in various chronological order.

Also — as is the case with Christianity — Islam teaches that only God knows the timing of the end time events. But there are signs to watch for that will indicate the season. There are both major and minor signs.

Many of the minor signs have to do with general trends in society. Others relate to specific events that will occur before the appearance of the Antichrist. The major signs relate to specific prophesied events that will occur between the time of the appearance of the Antichrist and “the Hour” of resurrection and judgment. The listings of both the minor and major signs vary greatly.

The minor signs which speak of general trends are a mirror of Christian end time signs.

There are a number of minor signs that are peculiar to Islam. They are as follows:

The major signs pointing to “the Hour” are all critical events that are part of the end time sequence of events, beginning with the appearance of the Antichrist. Muslim scholars generally do not try to present a strict chronological order of what is going to ultimately transpire, but the order presented below is representative:

The prophetic outline produced above is the one that is held by Sunni Muslims. The majority of Muslims in the world are Sunnis. They trace their heritage back to Mohammad. About ten per cent, located mainly in Iraq, Iran and Lebanon, are Shiites. Iran is the only nation with a Shiite majority. The split occurred in the 10th Century over the nature of the theocratic leadership of Islam. Shiites believe Islam’s leader should be a descendant of the Prophet Mohammad. Sunnis say leaders should be chosen by consensus. Shiites believe in free will whereas Sunnis adhere to the concept of predestination. Shiites exalt their Imams (spiritual leaders) as inspired teachers who have the authority to interpret Islamic law. For Sunnis, the interpretation of Islamic law has been theoretically closed since the 10th Century.

With regard to eschatology, the major difference between the two groups centers around a Messianic individual called the Mahdi. This individual is the embodiment of the earnest longing and hope of the Shiites who have been oppressed and persecuted throughout the course of Islamic history. There is no direct reference to the Mahdi in the Qu’ran. However, Shiites argue that he is inferred. In the Shiite scheme of end time events, the Mahdi takes the place of Jesus as the one who will defeat the Antichrist and create a kingdom that will fill the earth with goodness and justice. He is the one who has been destined from eternity to save the world from the forces of wickedness. In Shiite eschatology, Jesus is limited to assisting the Mahdi. Jesus’ specific mission is to propagate Islam among Christians and Jews.

The Hadith is a record of Mohammad’s words and deeds according to his wives, relatives, and companions. Next to the Qu’ran, it is the most important part of Islamic law. Its teachings are considered as binding as those contained in the Qu’ran.

The most recognized compilation of these sayings is the one by Sahih Al Bukhari. Some examples of the bizarre sayings of Muhammad which are contained in Bukhari’s nine volumes are reproduced below: