Still a need for healing. 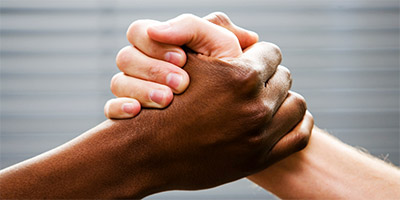 I was experiencing that ritual so common to every American male — the lengthy, boring wait in the local barber shop. This was nearly twenty years ago, and “hair stylists” were still thought of in those days as for women and sissies only. No, this was a real man’s habitat: a small town shop complete with rough-whiskered farmers and no-nonsense barbers who expected that if you got into their chair, they had every right to cut off the great majority of your hair.

I was prepared to hear the usual run of conversation about hunting, fishing, and other various and sundry guy topics, when suddenly the tone turned nasty. One of the barbers started into a tirade of his disgust with black people, liberally sprinkling his ideas with that derogatory term that told me this was no casual bigot. As I listened I found myself getting angrier and angrier, until shortly I was ready to walk out of the shop.

Then the discussion changed again and turned to, of all things, the end times. One of the men mentioned that he had heard that the government had come up with a new type of identification which would be in the form of an invisible tattoo that would be placed on the hand. At that, the barber immediately began to warn him that, at all costs, he should never allow that to be done to him.

I decided to stay around and have a little talk with this theologically correct racist. When it was my turn in the chair, I asked the barber what he had meant when he had warned the man not to receive the tattoo on his hand. He asked me if I had heard of the book or Revelation. I told him, yes, I thought I had heard of it. Then he emphatically declared that Revelation stated that if any man would take the mark of the beast, he would be lost forever.

In mock surprise I asked, “Oh, do you believe the Bible?”

He was indignant, assuming that he must have some big city liberal in his chair. “I sure do!” he proudly proclaimed.

“Then why don’t you believe the part which says, ‘He that says he is in the light and hates his brother is in the darkness still?'” I asked.

He gave me a confused look and said, “I don’t know what you mean.”

I told him, “You’ve been saying all these bad things about black people. Those don’t sound like the words of a born again Christian to me.”

At that he began to understand what I was getting at and finished our conversation with, “Never said I was.” (I wondered if I were going to leave that shop with a mohawk haircut, but by the Lord’s mercy I didn’t).

In 1995 we have seen several major events which have vividly portrayed the racial animosities and unrest which still mar our nation’s landscape. The O. J. Simpson trial was a watershed which revealed how differently most blacks and whites perceive the exact same events.

After the verdict of “Not Guilty,” 70% of whites were convinced that O. J. had literally gotten away with murder, while nearly 70% of blacks rejoiced unapologetically that a corrupt police system had not been able to frame an innocent man. At Howard Brown University, young black law students wept, screamed, and cheered ecstatically after the verdict was read, but when white Americans saw their jubilation on the news, they were sickened.

Shortly after this we saw Louis Farrakhan’s “Million Man March” in which somewhere between four to nine hundred thousand (depending on who was doing the counting) black men gathered together to “make atonement” for past transgressions and to encourage one another to take their destinies into their own hands.

Black Christian leaders debated among themselves whether to participate in the march. Some did, claiming that the goals were worthy even if the messenger was suspect, while others stayed home, feeling they could not endorse any movement headed by a man who has verbally attacked Jews, Koreans, Palestinian Arabs, whites, and even blacks who disagree with him.

While there is much division about the legitimacy of any march sponsored by Farrakhan, the overwhelming response to this event reveals that he clearly touched a nerve in the hearts and minds of many black men.

Besides these two major events, 1995 also saw fierce debates about the need for affirmative action, a determined effort by the Promise Keepers movement to include black ministers in their massive rallies, and Colin Powell’s brief flirtation with a run for presidency — an attempt which could have been successful had his desire for the nation’s top office matched the fervor of the popularity he had with both black and white Americans.

None can deny that blacks have made progress in the area of civil rights over the last forty years. Seeing documentaries about conditions in the south in the 1950’s makes one aware of how far we have come (and just how miserable things were for blacks in those days). Drinking fountains marked “For Whites Only” and restaurants with notices that blacks were not welcome make us appreciate the gains that have been made. They also make us wonder how America could ever have allowed such patently unfair practices to go on as long as they did.

As we look back over the struggle for racial equality, we find that the Church has indeed played a significant role. In England an ex-slave trader who became a preacher, John Newton (author of the song, “Amazing Grace”), felt so bad about the inhumanity of slavery that he influenced another British Christian, godly William Wilberforce, to fight for the rights of blacks. Wilberforce became a powerful politician and was probably the primary instrument, under God, to pressure England to make slavery illegal.

In America’s pre-Civil War days, that great evangelist and revivalist Charles Finney preached powerful messages about the evils of slavery, and went so far as to state that it was impossible to be right with Christ and still hold to the toleration of slavery (a radical idea in those days). He established what may well have been the first integrated college in America, in Oberlin, Ohio, which served as a base for him to go out and bring the winds of revival all across the nation.

The foremost evangelist of our day, Billy Graham, also exhibited a great desire for racial equality early on in his ministry, making a commitment in the 1950’s that he would not hold a crusade where whites and blacks were not free to sit wherever they pleased. In his book, Peace With God, Graham indicted the Church for not keeping pace with the courts in working for civil rights: “The Church should be the pacesetter. The Church should voluntarily be doing what the federal courts are doing by pressure and compulsion. And the Church should be doing it because the Holy Spirit has transformed their hearts…”

Where are We Today?

Yes, we have made progress. Yet, there is still much to be done. The vast majority of white Christians go to all white churches, and the majority of blacks attend all black congregations. Racial slurs are still heard in public places, even among professing Christians. Trailer parks have rules which insist that any trailer that is sold must be moved out of the park — a “rule” which is conveniently enforced if the purchaser is black, but somehow forgotten if the new resident is white. A small number of black athletes may make millions, but the average black youngster will have to work much harder than his white counterpart if he intends to go to college and rise above a minimum salary wage.

The answer must lie in the awareness that racism is a blight upon our nation. Not only the attitude of whites toward blacks, but blacks toward whites, Orientals toward Hispanics, and society in general toward Jews. Many conservative Christians are quick to denounce abortion and homosexuality, but are strangely silent on the issue of racism. It’s almost as though racism has become a “conservatively correct” issue to overlook.

The Witness of the Cross

Read the Old Testament and listen to the ancient Hebrew prophets thunder God’s denunciations against injustice and oppression. Perhaps the sin most condemned by the prophets was idolatry, but injustice seemed to run a pretty close second. As far back as the time of Moses, God must have foreseen that Israel would allow their special covenant relationship with Him to make them proud and uncaring for those of other races, and told them plainly: “The stranger who dwells among you shall be to you as one born among you, and you shall love him as yourself…” (Leviticus 19:34).

The ultimate reason for our acceptance of all people, regardless of race or social standing, is the cross of Jesus. There God declared the lost condition of all people, and there He loudly proclaimed His love for all people. He also stated His willingness to accept all people as His children if they will only repent of their sins and come to Him through faith in Jesus.

And when Christ shall return for His Church, what a rainbow of colors shall be seen in the air as blacks and whites, Orientals and Hispanics, Jews and Arabs, American Indians and Eskimos are all united with their Lord. Those who have become brothers and sisters on earth through the blood of Jesus will find that brotherhood enduring for eternity.