Home > Articles > The Certainty of Judgment

An overview of what the Bible says about resurrection and judgment. 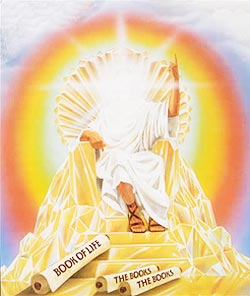 My boyhood church always taught that there would be one resurrection and one judgment. Everyone who had ever lived would be resurrected at one time, and all of us — the just and the unjust — would be judged at the same time. The sheep would be separated from the goats at the Great White Throne Judgment pictured in Revelation 20:11-15.

The Resurrection of the Just

Verses 22 and 23 go on to explain that all who have died in Christ shall be made alive, “but each in his own order: Christ, the first fruits, after that those who are Christ’s at His coming.”

The imagery of the harvest that is used in these verses is a key to understanding the first resurrection — the resurrection of the righteous.

In Bible times the harvest was conducted in three stages. It began with the gathering of the first fruits which were offered as a sacrifice of thanksgiving to God.

It proceeded with the general harvest. But not all was taken in this harvest. Some of the crop was left in the field to be gathered by the poor and the needy. This was called the gleanings (Leviticus 19:9-10).

The Resurrection of Old Testament Saints

A Summary of the Resurrection of the Just

The first resurrection, the resurrection of the righteous, occurs in three stages, beginning with Christ, continuing with the Church at the Rapture, and culminating with the Tribulation martyrs and the Old Testament saints at the return of Jesus.

The Resurrection of the Unjust

The second type of resurrection, “the resurrection of the wicked” (Acts 24:15), will take place all at one time at the end of the millennial reign of Jesus. This is at the time of the Great White Throne Judgment, the judgment of the damned (Revelation 20:11-15).

Every person who ever failed to relate to God in faith will be resurrected at this time, regardless of when he or she may have lived and died — whether before or after the Cross. This resurrection will also include the unjust who died during the Tribulation and the Millennium.

There will be no need for an additional resurrection of the righteous at the end of the Millennium, because all those born during that time who accept Jesus as their Savior will live to the end of the Lord’s reign (Isaiah 65:19-20). “‘As the lifetime of a tree, so shall be the days of My people,’… says the Lord” (Isaiah 65:22). In other words, life spans during the Millennium will be returned to what they were at the beginning of time, before the flood.

Resurrection will be followed by judgment. Solomon wrote, “Fear God and keep His commandments… For God will bring every act to judgment, everything which is hidden, whether it is good or evil” (Ecclesiastes 12:13-14).

The apostle Paul emphasized the certainty of judgment. In Romans 2:16 he wrote, “God will judge the secrets of men through Christ Jesus.” And in Romans 14:10, 12 he stated, “We shall all stand before the judgment seat of God… So then each one of us shall give account of himself to God.” The writer to the Hebrews summed it up succinctly: “It is appointed for men to die once and after this comes judgment” (Hebrews 9:27).

One judgment has already taken place. It is the judgment of believers for their sins.

This comes as a surprise to most Christians. Some find it hard to believe. I’ll never forget when I realized it from my study of Scripture. I became filled with so much joy that I felt like jumping pews all day!

Let me put it to you in another way. If you are truly born again, then you will never stand before the Lord and be judged of your sins. That’s because the judgment for your sins took place at the Cross.

You see, all your sins, and mine, were placed upon Jesus as He hung upon the Cross, and the wrath we deserve was poured out upon Him (2 Corinthians 5:21). He became our substitute. He took our judgment for sin (Romans 8:3 and Galatians 3:13).

If you have appropriated the blood of Jesus to your life by accepting Him as your Lord and Savior, then your sins have been forgiven. They have also been forgotten in the sense that God will never remember them against you again (Isaiah 43:25 and Hebrews 8:12).

Think of it — forgiven and forgotten! That is grace!

The Judgment of the Just

If the Redeemed will never be judged of their sins, then what will they be judged of, and when will the judgment take place?

Christians do not work to be saved; they work because they are saved. In fact, the Bible says they are saved to do good works (Ephesians 2:10 and Titus 2:14). Such good works, if properly done, will be done in the power of the Holy Spirit (1 Peter 4:11) and for the glory of God (1 Corinthians 10:31).

The Significance of Spiritual Gifts

Paul says in 1 Corinthians 12 that every person who is born again receives at least one supernatural spiritual gift from the Holy Spirit. A person may receive more than one gift. And, if you are a good steward of the gifts you receive, then you may receive additional gifts as you develop spiritually (Luke 19:26).

God expects us to use our spiritual gifts to advance His kingdom. This is what the judgment of works will be all about. Each of us who are redeemed will stand before the Lord Jesus and give an accounting of how we used our gifts to advance the kingdom of God on earth.

I can imagine some famous evangelist being brought before the Lord for judgment. “How did you use your spiritual gifts to advance my kingdom?” asks the Lord.

“I used my gifts as a teacher and evangelist to preach the gospel to millions,” replies the preacher.

“Yes,” says the Lord, “you certainly did that. But, I know your heart, and thus I know your motivation. You preached not because you loved Me but because you wanted to become famous. You wanted to have your picture published on the cover of Time magazine. You accomplished that in February of 1953. Here’s your picture. That’s all the reward I have for you!”

And then I can imagine the Lord calling up a little old lady that no one has ever heard of.

The Lord will give her a crown full of so many jewels that she will have a neck ache for eternity!

Seriously, there will be degrees of rewards. They will be manifested in the crowns we receive (2 Timothy 4:7-8), the robes we wear (Revelation 19:8), and the degrees of ruling authority which we exercise with the Lord (Luke 19:11-27).

The Timing of the Judgments

When and where will the judgment of the Redeemed take place? The Bible indicates the judgment of believers who have lived and died during the Church Age will occur in Heaven before the judgment seat of Jesus, immediately following the Rapture of the Church (2 Corinthians 5:10 and Revelation 19:6-9).

All the unrighteous who have ever lived will be resurrected and judged at the end of the millennial reign of Jesus.

The Judgment of the Unjust

The terrible judgment of the unrighteous is pictured in Revelation 20:11-15. It is called the “Great White Throne” judgment.

And since no one can be justified before God by their works (Isaiah 64:6 and Ephesians 2:8-10), all will be condemned to Hell. That’s why I call this judgment “the judgment of the damned.”

There is a popular myth in Christendom that says, “All sin is equal in the eyes of God.” That is not true. The only way in which all sin is equal is that any sin, whether a white lie or murder, condemns us before God and necessitates a Savior.

But all sin is not equal in the eyes of God. For example, Proverbs 6:16-19 lists seven sins that the Lord particularly hates, including “hands that shed innocent blood.” And the Bible makes it very clear that idolatry is a sin that is especially heinous in the eyes of God (Exodus 20:3-5).

Because God considers some sins worse than others, there will be degrees of punishment (Revelation 22:12), and these degrees will be specified at the Great White Throne judgment.

A Call to Repentance

Where do you stand with respect to the inevitable judgment which you will face before the Lord?

If you are a Christian, do you know what spiritual gifts you have been given? Are you using them to advance the Lord’s kingdom? Is your motivation a love of the Lord?

If you have never confessed Jesus as your Lord and Savior, do you really want to participate in the judgment of the damned? Do you realize that the Bible says, “Every knee shall bow and every tongue confess that Jesus is Lord”? That means Hitler and every vile person like him who has ever lived will one day make the confession of Jesus’ lordship. You will too.

I urge you to make that confession now so that you can participate in the resurrection and judgment of the righteous. As you consider your decision, weigh carefully the following words from the book of Hebrews: “Christ also, having been offered once to bear the sins of many, shall appear a second time for salvation without reference to sin, to those who eagerly await Him” (Hebrews 9:28).

Notice carefully that this verse promises that for those who are ready for Him, Jesus will come “without reference to sin.” That is a wonderful promise.

Concerning all the signs that we are at the end of this age, read more… 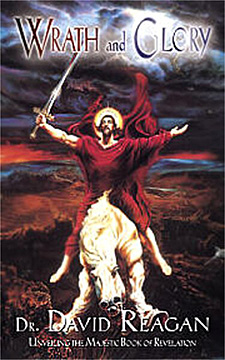 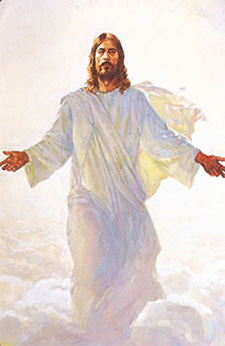 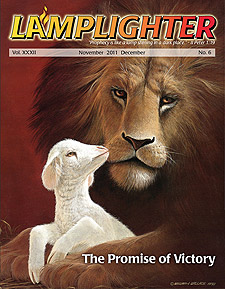 The Promise of Victory