Home > Articles > The Earth in Prophecy 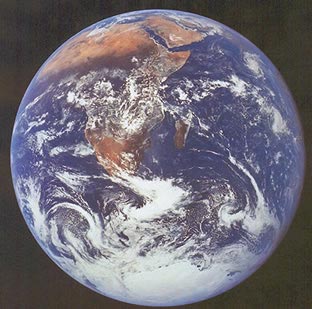 The first earth was the one created in the beginning (Genesis 1:1). It was perfect in every respect (Genesis 1:31). But because of Man’s sin, God placed a curse upon the earth (Genesis 3:17-19).

The Bible indicates that this curse radically altered the nature of God’s original creation. Instead of Man exercising dominion over Nature, as originally planned (Genesis 1:26, 28), Nature rose up in conflict with Man, as poisonous plants, carnivorous animals and climatic cataclysms (like tornados) suddenly appeared. 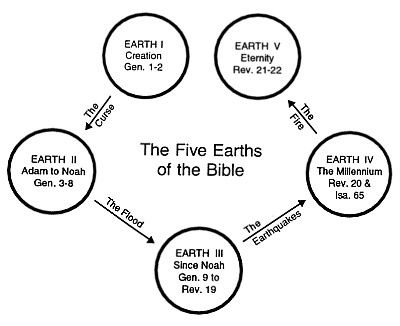 The curse radically altered the original earth, but Earth II was still quite different from the one we live on today. There is much Biblical evidence in both Genesis and Job that the second earth had a thick vapor canopy which shielded life from the ultraviolet radiation of the sun, producing the long life spans recorded in Genesis (see Genesis 2:5-6 and Job 38:8-11).

The whole earth was like a greenhouse with thick vegetation growing everywhere, even at the poles. There was also probably only one large land mass.

Like the curse, the Flood radically altered the nature of the earth. It produced Earth III, the earth we now live on.

The earth tilted on its axis, forming the polar caps. The unified land mass was split apart, forming the continents as we now know them (which is why they fit together like a jigsaw puzzle — see Genesis 10:25). And the vapor canopy was so completely depleted that ultraviolet radiation began to reach the earth in unprecedented levels, resulting in greatly reduced life spans, first to 120 years and then to 70 years.

The Bible reveals that the current earth, Earth III, will be radically changed again at the Second Advent of Jesus. The change agents will be earthquakes on the earth and supernatural phenomena in the heavens.

The changes produced will so totally alter the earth and its atmosphere that Isaiah refers to “the new heavens and the new earth” which will exist during the reign of the Lord (Isaiah 65:17).

Earth IV — The millennial earth — will be very different from the present earth. The earthquakes that will produce it will be the most severe in history.

The vapor canopy will likely be restored because life spans will be expanded to what they were at the beginning of time (Isaiah 65:20,22).

Further evidence that the vapor canopy will be restored is to be found in the fact that all the earth will become abundant once again with lush vegetation (Isaiah 30:23-26 and Amos 9:13-14). The Dead Sea will also become alive (Ezekiel 47:1-9).

But Satan’s last revolt at the end of the Millennium will leave the earth polluted and devastated (Revelation 20:7-9). Thus, at the end of the Lord’s reign, God will take the Redeemed off the earth, place them in the New Jerusalem, and then cleanse the earth with fire (2 Peter 3:10-13).

In other words, God will superheat this earth in a fiery inferno and then reshape it like a hot ball of wax. The result will be the “new heavens and new earth” prophesied in Isaiah 66 and Revelation 21.

This will be Earth V, the perfected, eternal earth where the Redeemed will spend eternity in the New Jerusalem in the presence of God (Revelation 21:1-4). The curse will be completely lifted from this earth (Revelation 22:3).

Restoration in the Old Testament

God loves His creation, and He is determined to restore it to its original perfection.

This purpose of God was reflected in the rites of the Tabernacle of Moses. Each year when the High Priest entered the Holy of Holies to make atonement for the sins of the nation, he would sprinkle blood on the Mercy Seat of the Ark — and also on the ground in front of the Ark (Leviticus 16:15).

The blood on the Mercy Seat pointed to the promise of God that one day He would send a Messiah who would shed His blood so that the mercy of God could cover the Law and make it possible for us to be reconciled to our Creator. The blood on the ground pointed to the promise of God that the sacrifice of the Messiah would also make it possible for the creation to be redeemed.

In the Old Testament, Isaiah 11 gives us a beautiful picture of the redeemed creation during the Millennium. We are told that the meat eating animals will cease to prey on each other and “will eat straw like the ox.” The poisonous animals will also be transformed. They will cease to be dangerous (Isaiah 11:6-9; 35:9).

The plant kingdom will similarly be transformed back to its original perfection before the curse. The result will be incredible agricultural abundance:

“Behold, days are coming,” declares the Lord,
“When the plowman will overtake the reaper
And the treader of grapes him who sows seed;
When the mountains will drip sweet wine…”
(Amos 9:13)

The prophet Joel adds that “the threshing floors will be full of grain, and the vats will overflow with the new wine and oil” (Joel 2:24).

The implication of these passages is that Man will no longer have to strive against nature because weeds and poisonous plants will cease to exist and rainfall will be abundant.

In fact, Isaiah tells us that areas of wilderness will be transformed into glorious forests (Isaiah 35:2) and deserts will become “springs of water” (Isaiah 35:7).

Restoration in the New Testament

The promise of a redeemed and restored creation is reaffirmed in the New Testament. Peter referred to the promise in his second sermon at the Temple in Jerusalem. He told his audience that Jesus would remain in Heaven until the time comes for the “restoration of all things” (Acts 3:21).

Paul then pictures the creation as a pregnant woman waiting anxiously for the moment of delivery when the curse will be lifted and the creation will be redeemed. He says that will occur at “the revealing of the sons of God.”

That is a reference to the resurrection of the saints, a point he makes clear in verse 23 when he says that the saints should yearn with nature for that same event because that is when each of us will receive “the redemption of our body.”

In Revelation 21 the apostle John gives us the most detailed look at what the new, eternal earth will be like. And yet, his description is tantalizingly vague. He makes a cryptic reference to the fact that there will no longer be any sea (Revelation 21:1). Beyond that, all he tells us is that God will make “all things new” (Revelation 21:5).

I think the reason the passages about the eternal earth tell us so little about the features of that earth is because they focus on one glorious fact that overshadows any concern with what the new earth will be like. That fact is that the Redeemed will live in the presence of Almighty God (Revelation 21 and 22). We will “serve Him” and we will “see His face” (Revelation 22:3-4). What the earth will be like pales in comparison to this revelation. 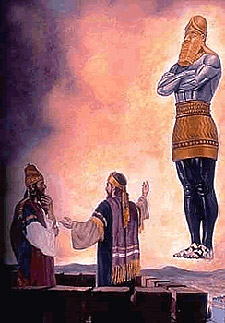