The Future Has Arrived!

The Fulfillment of Prophecy in Our Day and Time 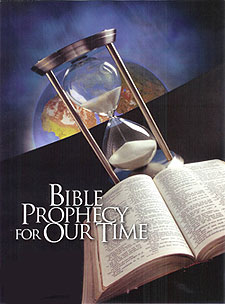 I am constantly running across articles by Dispensationalists in which the argument is presented that in order to be a “consistent futurist,” you cannot contend that prophecies are being fulfilled today. Instead, it is argued that all end time prophecy relates to Israel in the Tribulation and Millennium. Therefore, all we are seeing today is “stage setting,” but not the fulfillment of prophecy.1

I strongly disagree with this viewpoint. First of all, there are four end time prophecies concerning Israel that were fulfilled even before the 20th Century began. They are:

Some might respond by saying these are not end time prophecies, but they are. The end times or the “last days” began at the Cross. The writer of the Hebrew letter referred to his day and time (the First Century) as the “last days.” The Apostle Peter also called the time in which he was living the “last times” (1 Peter 1:5 & 20). And in the same letter he stated that “the end of all things is at hand” (1 Peter 4:7). The “end times” began 2,000 years ago. We are currently in the end of the end times, and we know this because God’s Word gives us signs to watch for that will mark the end of the age.

Consider, to begin with, the most prolific futuristic prophecy in the Hebrew Scriptures — namely, that in the end times the Jewish people will be regathered in unbelief from the four corners of the earth.

This regathering began in the late 19th Century when Theodor Herzl wrote his book, The Jewish State, in which he advocated that the time had come for the Jews to return to their homeland. In 1900 there were only 40,000 Jews in Israel. By the end of World War II this number had risen to 800,000. Today, it stands at nearly 6 million. The Jews continue to come, but there is no doubt this is a prophecy that is being fulfilled before our very eyes.

Or, consider the re-establishment of the state of Israel on May 14, 1948. This was a clear and definite fulfillment of Bible prophecy. It is an accomplished fact, and it is a miracle of God. It is not mere “stage-setting,” it is a play that has already been performed in full.

Another accomplished fact is the revival of the Hebrew language from the dead. When the Jews were scattered from their homeland in the First and Second Centuries, they stopped speaking Hebrew. The Jews in Europe mixed Hebrew with German and created a new language called Yiddish. The Jews in the Mediterranean Basin mixed Hebrew with Spanish and created a language called Ladino. But the Bible prophesied that the Hebrew language would be revived in the end times (Zephaniah 3:9), and that is exactly what happened in the late 19th and early 20th Centuries through the efforts of one man — Eliezer Ben Yehuda. Today, the people of Israel speak biblical Hebrew.

Equally certifiable is the reclamation of the Jewish homeland. As pointed out earlier, the Bible prophesied that it would become a desolation after the Jewish people were expelled from it. But the Bible also prophesied that when the Jews returned to the land, it would once again become a land of milk and honey:

“The desolate land will be cultivated instead of being a desolation in the sight of everyone who passed by. And they will say, ‘This desolate land has become like the garden of Eden; and the waste, desolate, and ruined cities are fortified and inhabited.'” (Ezekiel 36:34-35)

When the Jews started returning to their homeland in the late 19th Century, it was a total wasteland. Nearly all the trees had been cut down and the soil was badly eroded. The land resembled a desert. Most of the valleys had become malaria-infested swamp lands. The Jewish pioneers began planting trees, reclaiming the soil, and draining the swamps. Today, Israel is the bread basket of the Middle East.

Another prophecy that has definitely been fulfilled in our times is the resurgence of the Israeli military. Zechariah 12:6 says that in the end times, God “will make the clans of Judah like a firepot among pieces of wood and a flaming torch among sheaves, so they will consume on the right hand and on the left all the surrounding peoples…”

Finally, with regard to Israel before the Tribulation begins, the Bible prophesies that Jerusalem will be re-occupied by the Jews (Zechariah 12:2-3 & 6) and that it will become the focal point of world politics (Zechariah 12:3). The Jews returned to the city when it was captured in the Six Day War in 1967, and today, all the nations of the world are coming against Israel over the issue of who will control Jerusalem in the future.

But end time prophecies regarding Israel are not the only ones we see being fulfilled in whole or in part before our very eyes. Daniel prophesied that in the end times the old Roman Empire would be revived (Daniel 2:31-45), and we can see that being accomplished today in the creation and expansion of the European Union.

The Bible prophesies repeatedly that in the end times there will be a great apostasy in the Church (1 Timothy 4:1, 2 Timothy 3:1 & 5, 2 Timothy 4:3-4). We are up to our ears in that apostasy today as major Christian denominations ordain homosexuals, approve same-sex marriage, deny the deity of Jesus, and mock the inerrancy of the Scriptures.

In like manner, the Bible prophesies that “in the last days” society will disintegrate into a cesspool of immorality and violence (2 Timothy 3:1-5). Can there be any doubt that those days have arrived?

Daniel was told that the end time prophecies would not be completely understood until the end time — that is, until the time comes for their fulfillment (Daniel 12:8-9). That time must be upon us for we are living in the time when ancient prophecies are being understood for the first time ever, due to historical developments and technological advances.

Taking the Signs of the Times Seriously

I could go on and on, but I think I have made my point. The future has arrived! End time prophecies are being fulfilled today. What we are witnessing is much more than “stage-setting.” God is clearly fulfilling promises He made thousands of years ago to the Jewish people. And God is orchestrating the fulfillment of end time prophecies that are not related to the Jewish people.

It is exciting to see these prophecies fulfilled, and I am tired of seeing people attempt to depreciate their importance by flipping them off in a cavalier way as nothing more than mere “stage-setting.”

Jesus is coming soon. The signs of the times attest to that fact. God expects us to take those signs seriously because He is about to pour out His wrath upon this world in the Great Tribulation, and He does not desire that any should perish. The fulfillment of prophecy all around us today is God’s way of waking us up to the fact that we are living on borrowed time, and we need to use the remaining time to commit ourselves to holiness and evangelism.

1) A good example of the Dispensational viewpoint on this issue is an article by Ron J. Bigalke, Jr entitled, “Prophetic Fulfillment”.