Do they contain the Ten Commandments of the Antichrist? 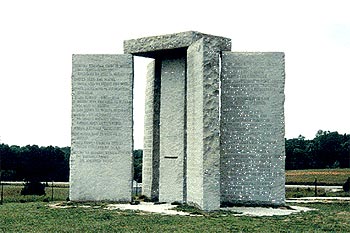 Several years ago I conducted a Gospel meeting in Toccoa, Georgia. While I was there I decided to check on a rumor I had heard about a mammoth granite monument that supposedly had been erected in the nearby town of Elberton in March 1980.

According to the rumor, the monument had been paid for by a mysterious group affiliated with the New Age Movement, an international amalgamation of Humanist societies whose aim is to prepare the way for the coming of “Lord Maetrea,” a Messiah who will save the world.

The guiding force behind the movement is the Lucis Trust located at the United Nations Plaza in New York. The movement has been well documented in Constance Cumby’s book The Hidden Dangers of the Rainbow. This is the same group that ran full page ads in all the leading U.S. newspapers in the spring of 1982 announcing “the Christ is now here” and will soon reveal himself. The group also runs ads in magazines promoting a special Humanist prayer.

I was able to confirm that the remarkable monument truly does exist. It is located on the highest point in Elbert County, about seven miles outside the town of Elberton, Ga. It is 20 feet high, taller than the monoliths of Stonehenge in England. It consists of 951 cubic feet of granite which weighs an estimated 245,000 pounds. The center stone and capstone contain slits and holes that are designed to provide astronomical observations of the sun, moon and stars. These are patterned after similar ancient pagan shrines in Europe.

The monument is dedicated to an “Age of Reason.” The statement, “Let these be Guidestones to an Age of Reason” is carved on each side of the capstone in four dead languages: Sanskrit, Egyptian Hieroglyphics, Babylonian Cuneiform, and Classical Greek. The four major granite slabs that radiate out from the central stone contain the ten commandments of the New Age of Reason. The commandments are presented in the eight languages which are spoken by two-thirds of Mankind: English, Russian, Hebrew, Arabic, Hindi, Chinese, Spanish, and Swahili.

The ten commandments are as follows:

The project was financed by a mysterious man who identified himself only as “Mr. R. C. Christian.” He admitted that was not his real name, but he refused to reveal his true identity to anyone except the president of the local bank in Elberton.

He stated that he represented “a small group of loyal Americans who believe in God.” He said they lived outside of Georgia and simply wished to “leave a message for future generations.” He claimed the group had planned the project for more than 20 years. Despite intensive investigations by many news agencies, the identity of R. C. Christian and his group has remained a secret to this day.

Lest there be any doubt left as to the motivation of “R. C. Christian” and his group, consider the following quotation taken from a philosophical document which the group sent to the builder of the monument. “It is very probable that humanity now possesses the knowledge needed to establish an effective world government. In some way that knowledge must be widely seeded in the consciousness of all mankind. Very soon the hearts of our human family must be touched and warmed so we will welcome a global rule of reason.” Note the exaltation of human reason and the emphasis on world government as the only hope for Man.

The document refers to the monument as “a cluster of graven stones’ whose purpose is “to convey our ideas across time to other human beings… We hope they [the commandments] will merit increasing acceptance and that through their silent persistence they will hasten in a small degree the coming Age of Reason.”

Satan knows Bible prophecy. He can read the signs of the times. He knows that Jesus is coming soon. Satan is preparing Mankind for the acceptance of his ultimate ploy to deceive the World — the unveiling of his Anti-Christ.

The Bible tells us that Satan disguises himself as “an angel of light” and that his servants disguise themselves as “servants of righteousness” (2 Corinthians 11:14-15). Isn’t it interesting that the man who financed the Georgia Guidestones called himself “R. C. Christian”? Is that a coincidence or a revelation?

My friends, we live in an age of deception. Jesus said that in the end times “false Christs and false prophets will arise and will show great signs and wonders so as to mislead, if possible even the elect” (Matthew 24:24). We must be spiritually discerning. We must “test the spirits” (1 John 4:1).