A blueprint for victory or surrender? 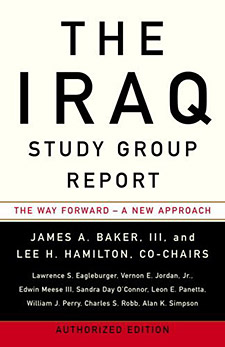 The worst Secretary of State in U. S. history, with regard to our relationship with Israel, was James Baker. He is the one who in 1991 forced Israel to start pursuing the suicidal appeasement policy of “trading land for peace.”

As soon as he left office in 1992, Baker arranged for Yasser Arafat to come to Houston, Texas so that he could be honored at the newly established Baker Institute for Public Policy located at Rice University. In my opinion, it was the equivalent to arranging honors for Adolf Hitler.

Since leaving government service, his law firm, Baker-Botts, has represented the interests of Saudi Arabia.

I was, therefore, not the least bit surprised that Baker’s study group issued a report on the war in Iraq that was vehemently anti-Semitic in nature. Incredibly, they blamed the unrest in the Middle East on Israel! Further, they argued that if only Israel could be forced to relent to Palestinian demands, the chaos in the Middle East would come to an end.

The reality is that the struggle in Iraq between the Sunnis and Shi’ites has nothing to do with Israel. Neither did the bloody war between Iran and Iraq (1980-1988). Neither did the Iraqi invasion of Kuwait (1990).

The fact of the matter is that if Israel were to cease to exist tomorrow, strife between Muslim factions in the Middle East would continue unabated. Sunnis would still fight Shi’ites. And radical Muslims of all flavors would seek to overthrow every secular government that exists in any Arab country.

The bottom line concerning Israel is very simple. If the Arabs would disarm, there would be peace in the Middle East. If Israel were to disarm, Israel would cease to exist.

Israel is not the problem in the Middle East. Israel is a threat to no one. The problem is Islamic resurgence, intolerance, and imperialism.

And from the Islamic viewpoint, all offers to negotiate are a sign of weakness. Power, and the willingness to use it, are the only things the Muslims respect.

The Folly of Appeasement

When are we, and the self-deceived leaders of Israel, ever going to recognize that we are engaged in a world war against Islamic Fundamentalism, and that our enemy is committed to unconditional surrender? When are we going to face up to the fact that there are evil men who are determined to destroy us and who are willing to lie and deceive in the process?

In 1938 British Prime Minister Neville Chamberlain thought he could placate Hitler by giving him a portion of Czechoslovakia. He flew to Germany and met with Hitler at Munich where he granted Hitler’s demands. When Chamberlain arrived back in England, he triumphantly waved the piece of paper in the air that Hitler had signed. “We have peace in our time!” he proclaimed. The man was a fool. He put his trust in an evil madman who must have been laughing himself silly over the Prime Minister’s naivete.

On his death bed Chamberlain is quoted as having said, “It would all have been okay if Hitler had not lied to me.” How sad it is to think that anyone with intelligence would put their faith in a person like Hitler.

Humanism vs. The Bible

That is the fatal flaw of the Humanist viewpoint. It is based on an assumption that Man is basically good and can therefore be trusted.

The biblical view is just the opposite. It teaches that Man is born with a flawed sin nature and cannot be trusted. Consider the words of Jeremiah (17:5 & 9): “Cursed is the man who trust in mankind… [for] the heart is more deceitful than all else and is desperately sick.”

The genius of the American founding fathers is that they recognized the truth of what the Bible teaches about the sinful nature of Man. They trusted no one, not even themselves. They therefore crafted a unique form of government that was filled with checks and balances. It was a government based upon a realistic assessment of Man’s nature.

At the height of World War II, at the Casablanca Conference in 1943, President Franklin Roosevelt declared that the aim of the Allied Forces would be “unconditional surrender.” The declaration caught Winston Churchill off-guard. He, together with European pundits, felt that FDR was being rigid and overbearing. From the European viewpoint, there always had to be a willingness to compromise. But FDR saw it differently because he recognized unmitigated evil. FDR’s policy was pursued and it resulted in absolute victory.

When Ronald Reagan became President, he proclaimed that the Soviet Union was an “evil empire” that had to be resisted with all means possible. He was crucified by the press for being an uncompromising ideological zealot. But as he began to apply the pressure, the Soviet Union collapsed. It was not compromise with evil that produced the victory.

The same is true with the Third World War we are currently fighting. First, we must clearly recognize who our enemy is. It is not terrorism. To say we are involved in a “war against terrorism” is equivalent to saying that World War II was a war against U-Boats and Kamikaze planes. No, it was a war against Nazism and Japanese Fascism. U-Boats and Kamikaze planes were the instruments of war used by our enemy, just as terrorism is the instrument of war used by our enemy today.

Our enemy is Islamic Fundamentalism. We need to recognize it and say it and stop deluding ourselves with politically correct proclamations that “Islam is a religion of peace.”

Second, we must face up to the fact that our enemies mean what they say. Before World War II the leaders of the world laughed at Hitler’s statements in his book, Mein Kampf — a book in which he clearly spelled out his intentions regarding Europe and the Jews. His words were dismissed as “empty rhetoric.” But the world found out the hard way that he meant what he said.

Likewise today, the irrational rantings and ravings of President Ahmadinejad of Iran and of other Islamic leaders about their intention to destroy Israel and the United States should be taken seriously. They mean what they say, whether we take them seriously or not.

The Spiritual Nature of Our Problem

The problem is that as we have abandoned our Judeo-Christian heritage, a moral rot has set in at the heart of our nation. We no longer know what we stand for, and we are no longer willing to pay the price that is necessary to defend our freedoms.

Our rampant materialism has made us a soft people unwilling to make any of the sacrifices necessary to stand against the flood of evil in the world. We grow tired easily when “sacrifices” are involved, like having to pay more for gasoline.

Europe gave up the fight a long time ago. And Europe’s surrender attests to the spiritual nature of the problem. Today, less than 5% of Europeans attend church. Christianity in Europe is dead, and Islam is sweeping the Continent.

Throughout the Western world, tolerance has become the supreme value, and consensus has become the ultimate aim of all policy. There are no longer any absolute truths, and therefore, there are no inherent evils. But as former Prime Minister Margaret Thatcher once put it, “Consensus is the process of abandoning all beliefs, principles, and values.”

With all due respect to the members of the Baker Study Group, I have no interest in finding “unity” or “consensus” with Islamic terrorists or their nation-state sponsors. I am only interested in their total defeat.

The fundamental problem today is that we in the West have abandoned God’s Word. We no longer have a core of biblical beliefs for which we are willing to die. We have no will to resist an enemy that is totally committed to its ideology and is unwilling to compromise with anyone. We are staring defeat in the face, and it may well be the final judgment of God upon us for our rebellion against His Word.