Home > Articles > The Law of Decay

Is there an antidote?

It was a big moment for my young bride, Sharon, and me. We were shopping for our first car. (The 1962 Plymouth we started with hardly qualified as a car.) As the elderly, rather eccentric man showed us into his garage to see his prize a 1967 Pontiac LeMans with a major dent on the driver’s side door we were suddenly aware of a terrible odor. I couldn’t imagine what it was that could smell that bad. Sharon saw it first: there lying motionless on the darkened garage floor was a cat that hadn’t just died yesterday. His rotting carcass was producing an aroma that would gag an elephant. We were getting a tangible demonstration of the law of decay. (We bought the car for $500 and left the cat.)

The law of decay is one of this world’s most plainly observable principles. It is universal, it has application in the natural world and the spiritual world, and it is an overwhelming force that man, with all his intelligence and technology, has not been able to overcome. We have learned to slow down the process, to delay decay for a season, but we have not been able to conquer it.

Decay in the Physical Realm

Everywhere and in all things we find this principle. Today’s beautiful Hollywood starlets often become tomorrow’s bitter old women. When Brigitte Bardot reached middle age, she lamented, “I haven’t bought a new dress in ten years. I don’t polish my nails, and I go to the hairdresser perhaps once a year. I don’t want to die, so I have to accept old age, right? It is horrible… It scares me more than anything else… I’m not so pretty. I wouldn’t want to inflict this sight on anyone anymore.”

Our bodies, which take nearly twenty years to reach peak performance, begin to go the other direction not so long after that. Football running backs are washed up at thirty-five. Men lose their hair, buy a pair of bifocals, and find their weight shifting from their chests to their stomachs. Women try mud packs, wrinkle creams, and exotic diets to put off the inevitable as long as possible.

We see this phenomenon in many other forms. The peach that was last week ripe, juicy, and delicious is this week’s trash, as decay renders it useless. The garden that was immaculate and beautiful to behold in June may be a weed-filled eyesore by late August. The majestic oak that once towered proudly in the air ultimately becomes a rotting log home for beetles, slugs, and termites as it lies useless on the ground, no longer able to support its own weight. Down through the ages it has always been: birth and life; death and decay. This law is universal, irreversible, and allows for no exceptions.

Decay in the Moral Realm

While nearly everyone readily recognizes the truth of this in the natural world, many don’t realize that this law is just as applicable in moral matters. Just as gravity exercises a powerful downward pull that affects everyone of us, there is a corresponding spiritual force that dominates men and women, nations and societies, and brings about “moral decay.”

Thus, apart from the intervention of God, it is always far more natural for good men to go bad than the other way around. Nations which have their beginnings in righteousness often require but a single generation to fall far away from their noble beginnings.

Our nation is a classic example of this. Liberals love to scoff at the idea that things have been getting worse in America. Columnist Richard Reeves, in an article titled: “America Hasn’t Gone Downhill Since the ’60s,” points out that people live longer, more youth go to college, air-conditioning and heating make life more comfortable, travel is possible in ways never thought of before, and television has opened the world to our eyes and minds. He concludes that “the United States today is a dramatically better place to live than the United States of 1959.”

If life consisted exclusively of mere animal comforts, and if the objective of life was to acquire as much as possible, he might be right. But let’s look a little deeper. Since 1960 the population of the U.S. has increased 41%. Total social spending by all levels of government has risen from 142 billion to 787 billion dollars, more than a five-fold increase. Yet with all this spending, and all our new technologies to make us more comfortable, there has been:

Had any of these things happened forty years ago, there would have been an outrage that would have closed down entire television networks and banned individuals from public jobs for life. What has happened? Why do we tolerate things that once were not only intolerable, but unimaginable?

There is a Scriptural term for this. The word is corruption, and it has the meaning: to be defiled, spoiled, morally decayed, rotted, or perverted. Basically it is a destructive force loose in our world that takes that which is good and ruins it.

This corruption affects not only individual men, but societies and nations as well. We have seen it, in larger and smaller degrees, since the early days of our nation, but it has become increasingly prominent in the last three decades. Since the 1960’s our country has been rushing headlong toward moral anarchy.

The Decay of an Icon

A classic example of this can be found in the “evolution” of the rock group, the Beatles. Do you remember when they appeared on the Ed Sullivan show? They were singing songs like “I Want To Hold Your Hand,” and “She Loves You Yeah, Yeah, Yeah.” They sported moptop haircuts and wore cute little suits with funny collars. Their music was merry, melodic, and meaningless. Listening to it, you got the picture of some high school boy shyly coming over to the girl of his dreams and asking to hold her hand. What could be wrong with that?

But within a very short time the Beatles began to change. Songs about high school sweethearts were replaced with psychedelic themes. John Lennon was writing songs with lyrics like “I’d love to turn you on” (drug term for getting high). Philip Norman, in his Beatles biography Shout states, “The wildest acid freak, listening in his mental garret to ‘Lucy in the Sky with Diamonds’ could not doubt that his mind had been blown to undreamed realms of psychedelic fancy.”

David Noebel, author of The Legacy of John Lennon, states that the consequences of the Beatles’ message of sex, drugs, and rock ‘n’ roll “have been devastating literally thousands of youth in their graves because of the Beatles’ drug and Bohemian messages; a whole generation believing Kurt Cobain and Jerry Garcia are heroes; a fatherless, godless, mindless and aimless generation… that will not only burden society in general, but in all likelihood be the spiritual and moral executioners of that society.”

The Decay of a Nation

It wasn’t only the Beatles, of course. All American society was being influenced by the secular “God is Dead” philosophy of the early and middle sixties. Many young people turned to drugs and sex as a reaction to the materialistic, secular lifestyles of their parents. The removal of prayer and the Bible from public schools, the constant new levels of sex and violence on TV and in the movies, and the increasing incidents of divorce and family breakdown were all highly visible testimonies to the corruption that was working powerfully in our nation.

It is interesting that we find this happening in the society of Noah’s day, the society God determined to destroy! In Genesis 6 we read: “So God looked upon the earth and indeed it was corrupt; for all flesh had corrupted their way on the earth. And God said to Noah, ‘The end of all flesh has come before Me…'”

Corruption had so worked it way into the fabric of men, women, and society in general, that God could not allow things to go on any longer. Destruction was His response to a world gone rotten.

In the book of Luke, Jesus gives an ominous warning: “As it was in the days of Noah, so it will be also in the days of the Son of Man” (Luke 17:26). Could He be predicting here that this same pattern of moral decay, destruction, and the sparing of a relative few would occur at the time of His return? If so, then the degeneration we are seeing all around us may be one of the major indicators that His coming is at hand.

As Noah was lifted above the terrible judgment that fell upon a decaying world, so Christ will gather His church to Himself as He prepares to unleash the divine fury upon a world that has murdered unborn babies, justified perverts, and scorned all that is holy. 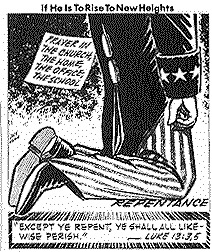 Corruption is an equal opportunity employer. It affects individuals of all races, colors, and sizes. We are all born with the principle of corruption built in. It can be seen in the selfishness of a toddler, the pouting of a teenager, the anger of a businessman on the freeway, and the impatience of the elderly woman at the nursing home. The Scriptures assure us that “Every one (of the children of men) has turned aside; they have together become corrupt…” (Psalm 53:3).

If nothing is done about it, this inner corruption ultimately leads to death, judgment, and hell, for “the wrath of God comes upon the sons of disobedience” (Ephesians 5:6). Religion has encouraged us to try diligently to keep the rules, and has frequently provided long lists of commands to observe. Millions of people all over the world struggle against corruption by making vows and resolutions, memorizing lists of commands, fasting, practicing asceticism, and participating in ceremonial rituals of various kinds. None of these has proven the least bit effective in dealing with the corruption that ferments within the human heart.

Peter tells us that God has provided a better way: Jesus Christ died on the cross and rose again not only to forgive our sins, but to provide us with a new incorruptible nature. “Having been born again, not of corruptible seed but incorruptible, through the word of God which lives and abides forever” (1 Peter 1:23). When we receive Christ by faith, and are clothed with His righteousness, a new nature is given us, a nature which is susceptible neither to physical decay nor spiritual contamination.

The only answer to death and decay is life. We can take an apple and place it in the refrigerator. This will not stop the decaying process; it will merely slow it down. This is the best religion has to offer, with its many rules and rituals. The rotting goes on, but at a slower pace.

The answer to death is not refrigeration, but LIFE! When Jesus Christ enters a man, woman, or society, He brings life. He doesn’t just reverse the process; He immediately infuses us with His life. This is why John writes, “God has given us eternal life, and this life is in His Son. He that has the Son has life, and he that does not have the Son of God does not have life” (1 John 5:11-12).

As we trust in Christ, and allow Him to live His life in us, we become agents of regeneration in the midst of a corrupt and decaying world. To God be the glory!