Home > Articles > The Nature and Purpose of the Tribulation

Why is God going to pour out His wrath during the Tribulation?

The unparalleled horror of the Tribulation is spelled out in detail in both the Hebrew Scriptures and the New Testament. Isaiah wrote that it will be a day of “the terror of the Lord” when “the pride of men will be abased” (Isaiah 2:10,17,19). Zephaniah proclaimed that it will be a “day of wrath,” “a day of trouble and distress,” and “a day of destruction and desolation” (Zephaniah 1:15). Men will stumble around like they are blind and “their blood will be poured out like dust” (Zephaniah 1:17).

This dreary picture is echoed in the New Testament. Jesus said it will be a time of tribulation “such as has not occurred since the beginning of the world until now, nor ever shall” (Matthew 24:21). In fact, Jesus said it will be so terrible that if it were not stopped at the end of seven years, it would result in the destruction of all life (Matthew 24:22). The Apostle John states that the chaos will be so great that the leaders of the world will crawl into caves and cry out for the rocks of the mountains to fall upon them (Revelation 6:15-16).

What’s it all about? Why is there going to be such carnage? How could a God of grace, mercy and love allow such an outbreak of unbridled terror and bloodshed?

One reason is to satisfy the justice of God. Yes, God is characterized by grace, mercy and love, but He is also a God of perfect justice, righteousness, and holiness. Therefore, He must deal with sin. His justice demands it. Even His love compels it. How could a God of true love simply overlook the actions of a murderer or a pedophile?

The prophet Nahum understood the true nature of God. He wrote that “The Lord is good, a stronghold in the day of trouble, and He knows those who take refuge in Him” (Nahum 1:7). That is the love and mercy of God. But the same prophet wrote (Nahum 1:2-3):

A jealous and avenging God is the Lord;
The Lord is avenging and wrathful.
The Lord takes vengeance on His adversaries,
And He reserves wrath for His enemies.
The Lord is slow to anger and great in power,
And the Lord will by no means leave the guilty unpunished.

Truly, the Lord is “slow to anger.” He allows the iniquities of Mankind to accumulate over long periods of time because He does not wish that any should perish (2 Peter 3:9). His desire, instead, is that all should come to repentance. But there is always a day of reckoning, just as there was in the days of Noah, and such a day has been set for this age. Paul referred to it in his sermon in Athens when he said, “He [God] has fixed a day in which He will judge the world in righteousness” (Acts 17:31).

A second reason for the Tribulation is to bring people to salvation. Amazingly, even when God pours out His wrath, His fundamental purpose is not to destroy but to save. Isaiah 26:9 explains it this way: “When the earth experiences Your judgments, the inhabitants of the world learn righteousness.”

The brutal fact is that God often has to hit us over the head with a two-by-four in order to get our attention and motivate us to repentance. The equally brutal fact is that most people respond to such discipline by either cursing God or continuing to ignore Him (Revelation 9:20-21). But some people always respond in humility and are saved. As Billy Graham has put it: “The same sun that melts the butter, hardens the clay.”

When God’s wrath is poured out during the Tribulation, some hearts will be melted, but most will be hardened, illustrating once again that nothing is as “deceitful” and “desperately sick” as the heart of Man (Jeremiah 17:9).

Man is frivolous about sin. God is serious. The Tribulation will be a graphic expression of how serious God is about Mankind’s rebellion against Him. 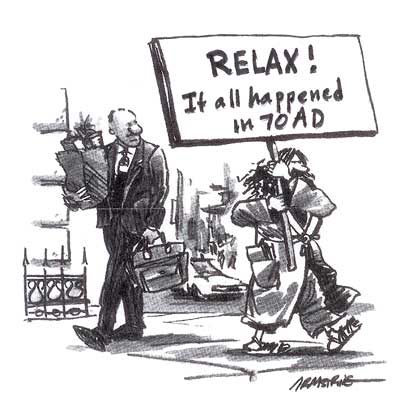 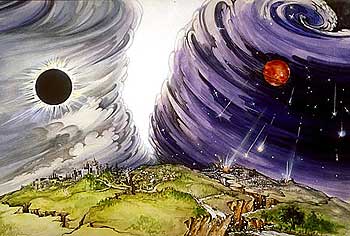