Home > Articles > The Reality of the Resurrection

The evidence and significance 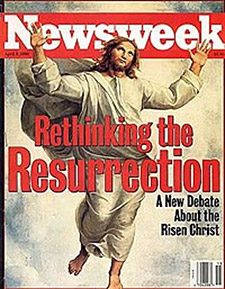 Paul says in 1 Corinthians 15:17 that “if Christ has not been raised, your faith is worthless.” Peter makes a similar statement in 1 Peter 1:3 where he states that our hope is based on “the resurrection of Jesus Christ from the dead.”

The Resurrection was the theme of the apostles’ preaching. We are told in Acts 4:33 that “with great power the apostles were giving witness to the resurrection of the Lord Jesus.” On the day of Pentecost, when Peter preached the first gospel sermon, the focal point of his message was the Resurrection: “This Man [Jesus the Nazarene], delivered up by the predetermined plan and foreknowledge of God, you nailed to a cross by the hands of godless men and put Him to death. And God raised Him up again, putting an end to the agony of death, since it was impossible for Him to be held in its power” (Acts 2:23-24).

The Significance of the Resurrection

The overwhelming significance of the Resurrection is to be seen in the fact that it sets Christianity apart from all other world religions.

The Resurrection is the unique stamp of Christianity, for only Christianity claims an empty tomb for its founder. No resurrection has ever been claimed for Abraham, Buddha, Confucius, or Mohammed.

Again, as Paul puts it in Romans 1:4 “[Jesus] was declared the Son of God with power by the resurrection from the dead.” In other words, it is the Resurrection that validates Jesus as God in the flesh.

There is no way to get around the fact that the Resurrection of Jesus is either one of the most wicked, vicious, heartless hoaxes ever foisted upon the minds of men, or it is the most fantastic truth of history!

Let’s consider the evidence of the Resurrection. And in doing so, we must start with the fact of the empty tomb.

When the soldiers reported their startling discovery of an empty tomb to the chief priests of the Jews, they were given a bribe to tell the people that “His disciples came by night and stole Him away while we were asleep” (Matthew 28:11-15).

And men have been concocting explanations ever since that time. Let’s consider some of those explanations, and as we do so, I think you will begin to sense that the shallowness of their arguments speaks louder in many respects than the counter arguments of Christians.

Explanations of the Empty Tomb

1) Confusion — Perhaps the silliest argument of all is that the disciples went to the wrong tomb! Yes, some supposedly learned men have proposed this theory over the years.

Yet, the Gospel accounts tell us that Mary Magdalene and Mary, the mother of Jesus, both accompanied Joseph of Arimathea and Nicodemas to the tomb and watched them prepare the body for burial (Matthew 27:57-61 and John 19:38-42). Are we to suppose that when the women returned they could not find their way?

And even if they did get lost and looked in the wrong tomb, did Peter and John do the same thing? Did the Roman soldiers forget which tomb they were guarding? Did Joseph of Arimathea suddenly have a memory lapse as to where his tomb was located? And why didn’t the Jewish leaders simply go to the right tomb and produce the body?

The answer is simple: the tomb was empty!

2) Theft — The oldest explanation of the empty tomb is the one the Jews made up and bribed the soldiers to tell namely, that the body of Jesus was stolen by His disciples. Yes, this explanation would have us believe that Peter, Andrew, James and John were body snatchers!

Now wait a minute. Are we really to believe that a small rag-tag band of followers who were scared witless at the arrest of Jesus and who fled into the night to save their own skins, suddenly found the courage three days later to take on a guard of Roman soldiers?

Even more significant, what would have been the motivation of the disciples to steal the body? We’re told over and over again in the Scriptures that they did not understand that Jesus was to be resurrected (Mark 9:30-32). Their behavior after the crucifixion testified to this as they sat around in despair mourning the loss of their leader.

And yet, this very group suddenly came alive with hope and went forth boldly proclaiming the Resurrection at the risk of their lives. Are we really to believe that a group of frightened disciples could be transformed into a courageous band of fearless proclaimers by snatching a body, hiding it, and then committing their lives to a lie? That’s more difficult to believe than the Resurrection!

3) Hallucination — One of the popular modern day theories has been the idea that the disciples experienced a series of hallucinations. As one advocate of this novel concept has put it, “They experienced a disruption of the physio-chemical structures of the brain in such a way as to be able to see what they desperately wanted to see.”

I will grant that Mary Magdalene might have had an hallucination. After all, she was a frightened and frustrated young woman wandering around in a cemetery at day break. As a matter of fact, the reaction of the disciples to her news of the empty tomb and her encounter with angels who informed her of the resurrection indicates that they thought she had been “seeing things” (Luke 24:11).

But what about the appearance of Jesus to all the apostles on three different occasions, or His appearance to 500 believers on a Galilean mountain, or His ascension before a host of disciples? (1 Corinthians 15:5-7 and Acts 1:1-11)

An hallucination is a highly subjective experience and a very personal one. Like beauty, it is in the eye of the beholder. To believe that 500 people could have the same hallucination simultaneously takes more faith than a belief in the Resurrection! And furthermore, the hallucination theory does not explain the empty tomb.

4) Hypnosis — Another modern theory is that the disciples experienced mass hypnosis. The advocates of this idea argue that the disciples so desperately wanted Jesus to rise from the dead that they created an aura of auto-suggestion (or mental hypnosis) and thus, whenever the name of Jesus was mentioned, His disciples believed they could see Him.

Now, mass hypnosis is a probability, with even as many as 500 people, given precisely the right type of controlled environment and the proper mass medium like radio, television, or film. But mass hypnosis without some form of mass media, and without a professional hypnotist, and without ideal conditions, is utterly outside the realm of sound reasoning. So, I ask you, how could 500 people in the open air of a country side, before the invention of mass media, and before the discovery of hypnosis, be subject to mass hypnosis? And how does this explain the fact of the empty tomb? I think it’s obvious that the skeptics are grasping at straws.

5) Fainting — This leaves us with a centuries old theory that has recently been popularized by an apostate Christian named Hugh Sconfield. It’s called the “swoon theory.”

This is the idea that Jesus really didn’t die on the cross. Instead, He just passed out and then woke up three days later. Sconfield has revived this idea in his book called The Passover Plot.

Mr. Sconfield would ask us to believe that after Jesus was scourged and crucified, and after He had laid in a cold, damp tomb for three days without food or water, He suddenly revived, removed His burial wrappings, rolled back the stone, and ran around the country side for 40 days without the benefit of even a dose of penicillin or a tetanus shot. Only a fool could believe such utter nonsense!

6) Nostalgia — There is one other theory that has become very popular among modern day liberal theologians. It is what I call the “nostalgia theory.” It’s the idea that the Resurrection occurred only in the hearts of the disciples.

A few years ago The Dallas Morning News reported this theory had been proposed to the students of SMU by a professor of New Testament theology from the Perkins School of Theology (SMU’s seminary). He stated in his incredible Easter “sermon” that Jesus had not really risen from the dead in any literal way. What happened instead, he explained, is that Jesus came alive in the hearts of his disciples as they sat around and discussed his life and teachings just as had been the case with the followers of Martin Luther King after his assassination!

Such a ridiculous concept is a natural outgrowth of liberal apostasy because it leaves them with the kind of Jesus they like one who was only human. Their “messiah” turns out to be a man who meant well, but who in reality was a deluded fool who thought he was God in the flesh.

This theory denies the well documented post Resurrection appearances of Jesus, and like all the other theories, it fails completely to explain the fact of the empty tomb.

The tomb of Jesus was empty. It was empty not because it was the wrong tomb. Nor was it empty because the body had been stolen.

But let me hasten to say that the greatest evidence of the Resurrection of Jesus is not the empty tomb.

The greatest evidence of the Resurrection in Scripture is to be seen in the transformed lives of Jesus’ disciples. For within 50 days of His crucifixion, His disciples had been miraculously transformed from a defeated, frustrated, hopeless group of individuals into a confident band of Christian soldiers determined to win the world for their Lord.

Jesus’ own brother, James, who did not believe in Him while He was alive, became the leader of the Church in Jerusalem. Peter, who denied Him three times in a fit of cowardice, began to proclaim Him boldly, even before the very Sanhedrin Council that had condemned Jesus to death (Acts 4:1-12). A young Christian by the name of Stephen gave his life for Jesus (Acts 7:51-60). And the most ruthless persecutor of the church, Saul of Tarsus, became the greatest missionary in the history of the church all because he encountered the risen Lord on the road to Damascus (Acts 9:1-9).

I ask you, what more evidence could one demand?

The Most Convincing Evidence

Well, there is more evidence, and I consider it to be the most convincing evidence of all. I have in mind the way in which people’s lives continue to be transformed today through their encounter with a living Jesus.

Have you met Him? Have you been born again by placing your faith in Him? Romans 10:9 says “if you confess with your mouth Jesus as Lord, and believe in your heart that God raised Him from the dead, you shall be saved.”

Salvation is to be found in a personal relationship with a living Jesus. Here’s how Jesus expressed it: “This is eternal life, that they may know Thee, the only true God, and Jesus Christ whom Thou hast sent” (John 17:3).

When one of Jesus’ disciples named Thomas finally encountered Him after His resurrection, he cried out, “My Lord and my God!” Jesus replied, “Because you have seen Me you have believed. Blessed are those who have not seen and yet believe” (John 20:28-29). I challenge you to believe in the risen Lord, “that believing you may have life in His name” (John 20:31). 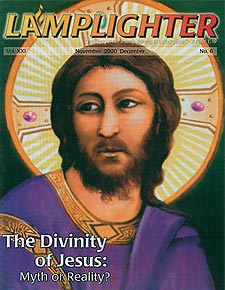 The Deity of Jesus

The Resurrection of Jesus