A “tall and smooth people”?

Some have pointed to Isaiah 18 which speaks of a people “tall and smooth” who are “feared far and wide.” The passage further states that this is a “powerful nation whose land the rivers divide.” The chapter ends by stating that the people of this nation will bring “a gift of homage” to the Lord when He returns to reign from Mt. Zion.

Because these verses speak of a powerful nation whose land is divided by a great river, some have jumped to the conclusion that the nation is the United States since it is divided by the Mississippi River.

But the opening verses of this chapter indicate it is speaking of “Cush,” the ancient name of Ethiopia. At the time Isaiah wrote this passage, Ethiopia was a part of the Egyptian empire and the river referred to is undoubtedly the Nile.

A “village” of Tarshish?

Probably one of the most popular passages where people claim to have found the U.S. is in Ezekiel 38 where the prophet describes an invasion of Israel that will be launched in the end times by a nation “from the remote parts of the north.” The descriptive verses about the northern power make it clear that this nation is Russia. What is not so clear is where the U.S. fits into this invasion.

Those who find us in the passage point to Ezekiel 38:13 which says that “the merchants of Tarshish and all its villages” (or “young lions” depending on translation) will speak out against the invasion. The argument is that Tarshish is Britain and the “villages” or “young lions” are the English speaking nations like the U.S. and Australia that were founded by British immigrants.

To say the least, this is a highly imaginative interpretation. Its validity is seriously questioned by the fact that no one knows for certain the true identity of “Tarshish.” Furthermore, recent archaeological developments indicate that Tarshish was most likely Spain, not Britain.

Another favorite passage for applied imagination is Revelation 12:13-17. These verses state that in the middle of the Tribulation God will provide a means of escape for the Jewish remnant in Israel. They will be carried into the wilderness to a hiding place on the “wings of a great eagle.”

Some people have seized on this imagery to teach that the U.S., whose national symbol is the eagle, will supply the end time air lift that will save the Jewish remnant.

But the Bible is its own best interpreter. And when you look up the phrase, “wings of an eagle,” you will find that it is the same one that God used in Exodus 19:4 to describe how He brought the Israelites out of Egypt. God is the eagle, not the United States (see Deuteronomy 32:11).

This brings us to the final and most widely used passage for identifying the U.S. in Bible prophecy. It is Revelation 18 where the destruction of “Babylon the great” is described.

There is no doubt that the United States shares many similarities with the corrupt commercial empire described in this chapter. But the U.S. is not a fulfillment of Revelation 18. That chapter is describing the last Gentile world empire that will dominate the earth at the time of the Lord’s Second Coming. It is the empire of the Antichrist.

So, where is the United States in Bible prophecy? The answer is that we are not mentioned directly and specifically. We are covered by general prophecies that relate to all nations, but beyond that, our end time destiny must be a matter of speculation.

General prophecies that apply to the U.S. include those that say all nations will be judged (Isaiah 34:2-3) and all nations will cease to exist except the nation of Israel (Jeremiah 30:11 and 46:28).

I personally believe that the reason the U.S. is not mentioned in end time prophecy is because we will suddenly cease to be a world power and will therefore play no significant role in end time events.

The destruction of American power is most likely to occur in two stages. The first could be an economic catastrophe that will result from our out of control debt situation. Our god is the dollar, and the Lord is going to destroy that god when the weight of our debt collapses our economy.

The second stage could occur when Russia launches its invasion of Israel (prophesied in Ezekiel 38 and 39). I believe it is very likely that they will launch a preemptive nuclear attack against our nation, since we are the only country in the world that might possibly come to Israel’s defense. This attack may be hinted at in Ezekiel 39:6 where it says that fire will fall on “those who inhabit the coastlands in safety.”

The Russian attack will probably come from submarines deployed off our East and West coasts. Each Russian sub carries more fire power than all the bombs dropped in World War II. Such an attack would give us only seven minutes warning, not even enough time to launch a counter attack.

With the U.S. immobilized, the Russians will then attack Israel and, according to Ezekiel, their army will be wiped out supernaturally by God on the hills of Israel (Ezekiel 39:1-4). The greatest power vacuum in the history of mankind will be created almost overnight. The world will be gripped by panic.

Into that vacuum will step a dynamic, charismatic European political personality who will be energized by Satan. He will begin to rally the world to his support through his brilliant proposals for world peace. The world will be mesmerized by him (Revelation 13:8).

Some argue that since the collapse of the Soviet government, Russia is now too weak to launch any attack against Israel or the United States. But the economy of Russia has rebounded due to the nation’s vast oil reserves, and its military power is intact, including thousands of nuclear warheads!

In fact, Russia is far more dangerous to the world today than before the Soviet collapse. The increased danger is rooted in the instability of the government.

There is no hope for democracy in Russia because the societal values that are essential for the working of a democratic system do not exist. Nor is there any historical experience with democracy. Before the Commissars were the Czars.

As I predicted from the outset, the experiment with democracy did not last long. Vladimir Putin has created a new tyranny that is obsessed with territorial expansion. Putin will most likely resort to one of the oldest techniques of government — namely, stirring up trouble abroad to divert people’s attention away from their domestic problems. That foreign trouble will ultimately be the invasion of Israel.

The Parallel of Habakkuk

I admit that I do not like this speculative scenario. But it seems the most likely chain of events to me. When it first occurred to me, I was particularly repelled by the idea of God using Russia to judge our nation. I asked, “How can a holy God punish those who are evil with those who are more evil?”

My quest for an answer to that question led me to the book of Habakkuk. I discovered that Habakkuk asked God the same question when God revealed to him that Judah would be judged by an invasion of the Chaldeans.

God never answered Habakkuk’s question. He just called on Habakkuk to proceed in faith, believing that God knew best (Habakkuk 2:4). After a difficult spiritual struggle, Habakkuk stepped out in faith and said, “Lord, even if the Chaldeans completely destroy us, I will continue to exalt Your name” (Habakkuk 3:17-19).

The Chaldeans came. They destroyed the nation of Judah and the Temple of God. But where are the Chaldeans today? In the dust bin of history. Where are the Jews? Regathered to their land.

The point is that God has the wisdom and power to orchestrate the evil of Man to the triumph of His holy will in history. It is not for us to question His ways. Rather, it is for us to trust Him.

But there is another point to consider. Are we really more righteous than the Russians? I think not.

In fact, I believe we are far more dangerous to the world spiritually than the Russians have ever been, for we are the world’s moral polluter through the export of our sleazy television programs, our filthy movies, our satanic music, and our degrading pornography.

We are a people who have turned our back on God. The day of judgment for us will be far more severe than for the Russians, for “to those to whom much is given, much is expected” (Luke 12:48).

There is another possible fate for the United States. If the Rapture were to occur today, we would be devastated because our nation contains more born again Christians than any other nation in the world — more than all of Western Europe combined. Further, we have many born again Christians in high positions of commerce and government. The Rapture would reduce our nation to chaos, removing us from the international scene as the world’s dominant power.

We can hope and pray that this will be the destiny of our nation, because if it is not, we are headed toward outright destruction due to our rebellion against a gracious God who has blessed us more than any other nation that has ever existed. 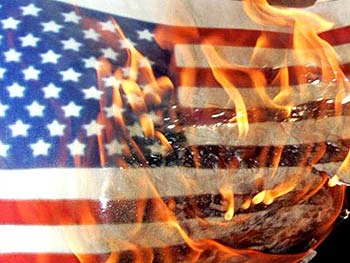