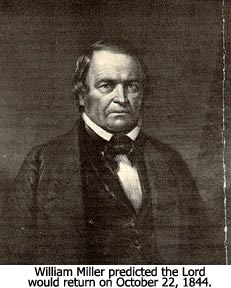 Sometimes false prophets are orthodox Christians who sincerely believe that God has given them a special insight that no one else has been given. They become self-deceived, and despite their sincerity, they end up leading many fellow Christians astray.

William Miller (1782-1849) was such a man. As one historian has summed him up: “He was no bug-eyed fanatic.” Rather, he was a “square-jawed, honest, church-going farmer.”1 But he became a “prophet of doom” whose false prophecies ruined the lives of many people and caused tens of thousands to become disillusioned with their faith.

Miller was born and raised in upstate New York. In 1803 he married and moved to Vermont where he became a farmer and served as sheriff and justice of the peace.

This area of the nation was awash at the time with millennial dreams. When Miller was converted from Deism in 1816, he became caught up in the millennial fever.

As Miller later explained, he began to search the Scriptures diligently to discover truth. Within two years of his conversion, he became convinced that a very special truth had been revealed to him. It concerned the meaning of Daniel 8:11-14.2 This passage states that a time will come when “the sanctuary” will be trampled and that the sanctuary will not be restored “for 2,300 evenings and mornings.”

This is a prophecy about a prophetic type of the Antichrist, a Greek tyrant by the name of Antiochus Epiphanes, who stopped the sacrifices in the Jewish Temple in Jerusalem in 168 BC. Many scholars believe the reference to 2,300 evenings and mornings refers to 1,150 days (composed of 1,150 mornings and 1,150 evenings). If so, then the time period would constitute the three years and 55 days from Tishri 168 BC, when the sacrifices ceased, to Chislev 165 BC (December 25th), when the Temple was cleansed and the sacrifices were resumed.

But Miller ignored the context of the passage and jumped to the conclusion that the “2,300 evenings and mornings” stood for 2,300 days, which, in turn, were symbolic of 2,300 years. Then, assuming the date of the prophecy was 457 BC, Miller added 2,300 years and concluded that the Lord would return in 1843.

There were a number of problems with Miller’s conclusion:

Anyone knowledgeable of Bible prophecy could have quickly corrected Miller’s erroneous teaching. But Bible prophecy had been sorely ignored by both Catholics and non-Catholics for 1,400 years, ever since Augustine had spiritualized all of God’s Prophetic Word in 400 AD, arguing that the Church is the fulfillment of prophecies concerning the Millennium.

In short, the Church at large was wallowing in ignorance of Bible prophecy, and that made the average person in the pew a sitting-duck for an end-time date-setter.

The Beginning of a Movement

At first, Miller was reluctant to reveal his discovery. But in 1828 he felt an “inward call” to tell the world what he had found. “I tried to excuse myself,” he later wrote. “I told the Lord that I was not used to speaking… that I was slow of speech and slow of tongue. But I could get no relief.”3

In 1831 Miller finally found the courage to share his secret insight with family and friends. He started receiving invitations to speak at local churches, and in 1833 he was licensed to be a Baptist preacher (although he was never formally ordained).

Two events combined to give him a larger audience. In 1838 a book containing his revelation was published. It was entitled, Evidence from Scripture and History of the Second Coming of Christ, About the Year 1843. The book led to a speaking tour in New England where Miller met Joshua V. Hines, pastor of a Baptist church in Boston. Hines immediately sensed the potential of Miller’s message, and he eagerly decided to become Miller’s manager and publicity agent.

Hines proved to be an inspired promoter. He provided Miller with a large chart showing his millennial calculations, he purchased Miller the biggest tent in the country, and he sent Miller on an extended speaking tour. Hines also launched two journals, one based in New York called “Midnight Cry,” and the other in Boston, named “Signs of the Times.”4

The result was that William Miller was transformed into a phenomenon which came to be known as the Millerite Movement. Historians estimate that he had 50,000 hard-core followers by 1843. But it is certain that millions of others were captivated with curiosity about Miller’s confident expectation that the Lord would return in 1843.

Pressure for a Specific Date

As the year of Miller’s prediction approached, his followers began to demand a more specific date. To his credit, Miller was reluctant to set an exact date. However, in January 1843 he gave in to the pressure and announced that the Lord’s return would most likely occur during the Hebrew spiritual year which stretched from March 21, 1843 to March 21, 1844. But in doing this, he showed signs of nervousness. He emphasized that if his prediction should prove to be “slightly inaccurate,” his followers should keep their faith that the Lord would return soon.5

A month after Miller narrowed down his date, in February 1843, a large, unexpected comet appeared in the skies. This “sign in the heavens” greatly heightened the expectations of his followers and attracted additional attention to the Movement.6

At long last, the final day in Miller’s time span arrived — March 21, 1844. When nothing happened, Miller confessed his disappointment. It might have ended there, but one of his followers pointed out to him that Habakkuk 2:3 and Leviticus 25:9 indicate that there must be a “tarrying time” of seven months and ten days.7

Revision of the Prophecy

Habakkuk 2:3 says: “The vision is yet for the appointed time; it hastens toward the goal, and it will not fail. Though it tarries, wait for it.” Leviticus 25:9 reads: “You should then sound a ram’s horn abroad on the tenth day of the seventh month; on the day of atonement you shall sound a horn all through your land.”

Based on this patching together of these two totally unrelated scripture passages, Miller decided to add seven months and ten days to his prophecy, setting a new date for October 22, 1844. The rallying cry of the movement became, “The Tenth Day of the Seventh Month!” Expectations were revived, and tens of thousands put their hope in the new date.

When the second date came and passed without incident, most of Miller’s followers became totally disillusioned. The whole experience was dubbed “The Great Disappointment.” Miller died in disgrace four years later in 1849.

An unfortunate but understandable legacy of the Millerite Movement was the creation of an atmosphere of skepticism toward Bible prophecy. Many Christians decided to wash their hands of prophecy, concluding that it was nothing more than a playground for fanatics. That attitude prevails to this day among many Christians.

Another legacy of Miller was the foundation of the Seventh-Day Adventist Church. One small group of Miller’s followers in New England decided that he had not been wrong after all. They concluded that Jesus did purge the sanctuary on October 22, 1844 — but the sanctuary He cleansed was in Heaven and not on earth. They further argued that the reason He had failed to return to earth on the specified date was because of the Church’s failure to observe the Jewish Sabbath!8

The Emergence of a Classic False Prophet

The leaders of this group were James White and his wife, Ellen Gould White. Although Ellen White never held any official title as head of the church, she rapidly emerged as its spiritual leader. She claimed to have the “gift of prophecy,” and she claimed that her messages came directly from God. Her writings are considered by some Adventists today to be equal in authority with Scripture.9 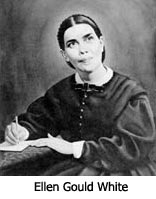 In one of her most revered works, Ellen White declared that Sabbath observance would be the “line of distinction” in the “final test” that will separate God’s end time people who “receive the seal of God” and are saved. Those who reject Sabbath observance are the ones who will receive “the mark of the beast.”10 In short, she denied that salvation is by grace through faith (Ephesians 2:8).

She also blasphemed the work of Jesus on the Cross by arguing that His atoning ministry did not end there but was resumed in 1844 when His “investigative judgment” began in Heaven. Since that time, she argued, the works of every person who has ever lived are being judged to determine those who have kept the commandments of God and are therefore qualified for Heaven.11

Yet, despite the manner in which this concept perverts the true Gospel, Ellen White declared that a person must believe it in order to be saved.12

William Miller was a sincere Christian who yearned for the Lord’s return in his lifetime. Although he was called a prophet by his followers, he never claimed to be one. Instead, he claimed to be just a student of the Word who discovered a hidden truth.

Miller ultimately became a victim of his own movement as he was pressured to set a specific date for the Lord’s return. It was at that point that he became a false prophet, for the very Scriptures he so revered state that no one can know the day or the hour that Jesus will return (Matthew 24:36). 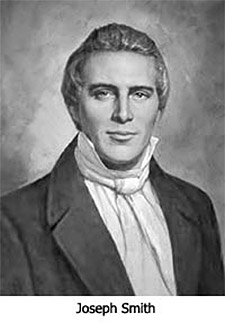 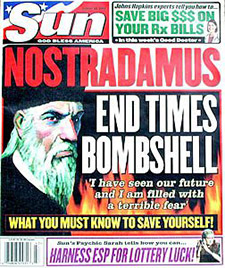