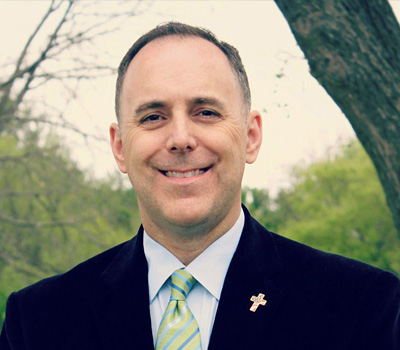 Tim Moore serves as the ministry’s new Chief Executive Officer and Senior Evangelist. He is also the President of our Board of Trustees. A native Kentuckian who lives in Elizabethtown, Kentucky, he and his wife, Amy, have 4 children and 3 grandchildren.

Tim entered the Air Force at age 17 to attend the United States Air Force Academy. Upon graduation, he completed pilot training and immediately served as an Instructor Pilot on the T-37 and then the C-130. While on active duty, he completed his master’s degree at the University of Arkansas. In 1998, Tim returned home to Kentucky and transitioned into the Kentucky Air National Guard. Over the next 10 years, he deployed repeatedly, including tours in Iraq and Afghanistan. He was named an Outstanding Graduate of the Air War College based on his analytical paper of Israel’s “Operation Moked” — the air campaign in the 1967 war. He retired as a Colonel after 34 years in the military, then continued to volunteer as an Admissions Liaison Officer and Congressional Nomination Board member for the Air Force Academy.

In 2000, Tim began flying as an Instructor Pilot for UPS. In 2006, he was elected to the Kentucky legislature as a State Representative. For 13 years he was an outspoken voice for godly principles in championing life, traditional marriage, and government that is limited to its appropriate sphere. He also chaired the “Veterans, Military Affairs, and Public Protection” Committee, the Pro-Life Caucus, and the Prayer Caucus. He resigned from his legislative role to become the Director of Lamb & Lion Ministries.

Tim has also served in several local charities and on the Foundation Board of The Southern Baptist Theological Seminary in Louisville. He took seminary classes through Liberty University and has been an ordained deacon and Bible study teacher for years in Sunday Schools, home groups, and deployed “tent city” locations. He is also an ordained minister and evangelist. Overriding all else, he also has a passion for the Lord’s soon return.

In 2013, Tim responded to Dr. Reagan’s invitation and became an evangelist with Lamb & Lion Ministries. In 2019, Dr. Reagan asked him to become his designated successor. The ministry board approved a 2-year transition plan to follow the wisdom of Proverbs 16:9 — “The mind of man plans his way, but the LORD directs his steps.”

As the ministry’s Director, Tim is the editor of the ministry’s bi-monthly magazine called the Lamplighter. He is also the main host of Lamb & Lion’s weekly television program called Christ in Prophecy. This program is broadcast nationally on Christian networks which combined have access to millions of homes across the United States. And, through DayStar and the Internet, the program is available to every country in the world. The program deals with the prophetic significance of national and international events.

Tim is able to travel anywhere to share the message that Jesus Christ is coming soon.

I thoroughly enjoyed the breakout sessions with Tim Moore. His presentations were very concise and thought-provoking. He spoke in a way that was easy to understand and got his points across. I liked his relaxed style of presentation along with his humor. I would certainly like to hear him speak again.
– Steve G.

Tim’s command of Bible prophecy was very impressive! His presentation was logically organized, which made it very easy to follow along. I found his use of printed presentation notes particularly helpful. Also, I thoroughly enjoyed his discussion about the tours he had made to Israel. I understand that our church is planning a trip with Tim in the next couple of years. Lord willing, my wife and I plan to join in on that awesome experience! It was a blessing seeing him speak at the Conference and I would love to see him come back and speak again.
– Jerry H.

By far, the most impressive thing about Tim’s presentation was his command of facts and his reliance on God’s Word to support his points. He steadfastly avoiding setting dates for the return of Jesus. I asked our Men’s Minister to work to get Tim back again.
– Greg A.

The most important thing about his presentation was that Tim backed up his points with details and Scripture on how God’s plan may unfold. Tim was very clear in his manner, very professional guy, very learned, very well-spoken. He speaks with authority.
– Terry P.

It was a joy having Tim speak at our annual Men’s Conference. His presentations were — hands down — the most popular at the Conference; many attendees expressed to me how impressed they were with Tim. His knowledge of God’s prophetic Word is fascinating and his style of delivery is very engaging and smooth. Without reservation, I would enthusiastically recommend Tim as a speaker to anyone looking for a true expert on Bible prophecy. He provided printed notes to the attendees to augment his spoken comments and his PowerPoint presentations. The handouts greatly aided the audience in acquiring a deeper understanding of the prophecy topics presented. Tim is gifted in being able to make Bible prophecy come alive for his students; clearly, Bible prophecy can be a challenging subject for many and, if not presented well, becomes too abstruse for some Christians to remain engaged. Tim never allowed his messages to flag! Having attended the Lamb and Lion Bible Conference many times in the past years, I have come to regard Tim, and the other experts at Lamb and Lion, as some of Christendom’s finest “go-to” sources for cogent, authoritative treatment and handling of Bible prophecy. They get it. My experience with Tim was fantastic! He is so easy to work with… just a pleasure. Tim is a friend that I thank God for, and I thank Tim for blessing us at our Conference. As Tim would tell me — Godspeed!
– Rob Seale (Men’s Minister, Houma First Baptist Church, Houma, LA)