In Defense of a Prophetic Voice 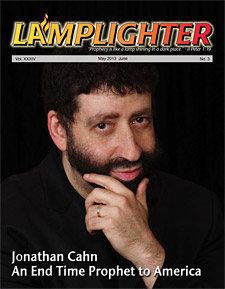 When Jeremiah told the people of Judah that it was God’s will for them to surrender to the Babylonians and go into captivity, he was demonized as a false prophet and a traitor, and the people tried to kill him.

In like manner, Jonathan Cahn has been the victim of irresponsible and vicious attacks. He has been accused of “parading as a prophet.” Others have branded him a “false prophet.” These charges are reckless, unwarranted and un-Christ-like.

Jonathan Cahn’s message is thoroughly biblical. It is not based on any new revelation from God. Rather, it is based on the biblical principles that govern God’s relationship with nations. These are principles that I outlined in detail in my 2003 book entitled America the Beautiful? The United States in Bible Prophecy (revised editions in 2006 and 2009).

The charge that he is a “false prophet” is downright ludicrous. His message is that America is in rebellion against God, that God has placed remedial judgments upon us, and that if we do not repent, God will deliver us from judgment to destruction. I ask you, “What part of that message is unbiblical?”

Furthermore, the Bible defines a false prophet as one who prophesies events that do not come to pass. If Rabbi Cahn prophesied that a specific event would take place on a specific date and that date were to come and go without the event happening, then he could legitimately be labeled as a “false prophet.” But he has done no such thing.

He is simply declaring biblical principles. He is reminding us of the following truths:

Others have attacked Rabbi Cahn because they argue that he has taken a scripture directed to ancient Israel (Isaiah 9:10) and has applied it to the United States. Again, I ask, “What is wrong with that?” If the scripture is applicable, why not apply it to our nation?

Actually, we do that all the time. The Psalms and Proverbs were written to the Jewish people, yet we apply them to ourselves. Should we reject the 23rd Psalm because it was not specifically addressed to the Church?

Incredibly, Rabbi Cahn has been criticized for applying 2 Chronicles 7:14 to the United States. It reads as follows:

[If] My people who are called by My name humble themselves and pray and seek My face and turn from their wicked ways, then I will hear from heaven, will forgive their sin and will heal their land.

Are we actually going to contend that this scripture applies only to Israel? Are we really going to argue that if the professing Christians of this nation were to sincerely repent of their sins and the sins of our nation, that God would ignore it?

This particular scripture contains a timeless principle about repentance that even applies to pagan nations. Thus, when God sent the prophet Jonah to the pagan city of Nineveh with a message of “Turn or Burn!” the Lord changed His mind when the king put on sack cloth and ashes, repented, and called for the whole city to do likewise.

Or consider the seven letters contained in the second and third chapters of Revelation. Each one was addressed to a specific church located in the area of Asia Minor (modern day Turkey). Do the letters apply only to those specific churches? Of course not! They are just as relevant to the Church at large today as they were when they were written to the seven specific churches in the First Century.

Many of the criticisms of Rabbi Cahn’s message are based on unwarranted conclusions that people have jumped to in an effort to find something to criticize. For example, he has been accused of teaching that America is in a covenant relationship with God. The fact of the matter is that he has never said that. He simply notes that America’s founding fathers believed that, and therefore they consecrated the nation to God.

Another unwarranted conclusion is that he teaches Isaiah 9:10 was a prophecy about the United States rather than Israel. Again, Rabbi Cahn has never made such an assertion. What he teaches instead is that the ancient pattern of judgment that occurred in Israel is now recurring in America, and in “a stunningly precise way.”

A Book and a Sermon

As I reported in a recent issue of this magazine, I was not particularly impacted with Rabbi Cahn’s book, The Harbinger. Its writing style was not my cup of tea. But so what? It greatly impacted tens of thousands of others, and I was immensely impressed with the overall message of the book. It contained a biblical message that I believe the American people desperately need to hear, and I was delighted over the book’s success as it rose to the top of the best seller list. 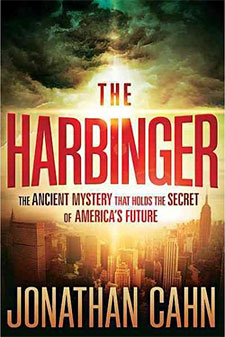 What impressed me even more was Rabbi Cahn’s sermon which he presented at the recent Presidential Inaugural Breakfast in Washington, D.C. As I watched it on YouTube, I was transfixed by the frank, biblical content of the message and by Rabbi Cahn’s powerful, anointed delivery of it.

The message presented a stark, bone-chilling indictment against this nation for thumbing its nose at God. It was a hardhitting prophetic message that took great courage to deliver. I urge you to watch the 35 minute message on YouTube. (You can find it easily by googling Cahn’s name.)

Christians should be giving Rabbi Cahn a standing ovation, and many have. But some leaders of discernment ministries have tried, instead, to crucify him.

I know a genuine prophetic voice when I hear one, and as I watched Rabbi Cahn deliver his powerful message, I realized he was a prophetic voice raised up by God to warn this nation of its impending doom and to call us to repentance.

He is the successor to David Wilkerson who began delivering the same message in the 1970’s. At that time Wilkerson was the darling of the Pentecostal and Charismatic Movements. But the moment he began to call this nation to repentance and warn of God’s impending judgment, he was mercilessly attacked as a “false prophet” and was accused of misusing scriptures. Many churches stopped handling his books and speaking invitations were canceled. He was condemned for preaching a “negative message.”

The current unbridled, petty and vicious attacks on Rabbi Cahn smack of what I would call “Christian McCarthyism.” For those of you who might not be familiar with what I’m referring to, let me explain.

In the 1950s a wave of anti-Communism swept this nation and a Senator from Wisconsin named Joseph McCarthy decided to ride the wave. He started holding Congressional hearings during which he made wild allegations against many people, accusing them of being either Communists or Communist sympathizers. In the process, he ruined the lives of many people.

Senator McCarthy met his Waterloo when he decided to attack the U.S. Army, claiming many of its top officers were tainted by Communism. This action hurt him in two ways. First, it turned President Eisenhower against him. Second, the Army hired a defense counsel who would surprisingly prove to be very formidable. I say surprisingly because the attorney, Joseph Welch, seemed to be someone who would be eaten alive by McCarthy. That’s because Mr. Welch had a high, squeaky voice and an elf-like appearance. 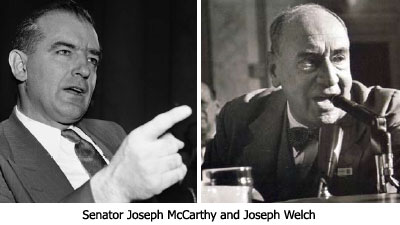 As Mr. Welch began to demand that Senator McCarthy present evidence of his allegations, the Senator decided to go on the attack. He started accusing a young lawyer on Welch’s staff of being a Communist sympathizer. Welch interrupted the Senator and cried out in a wailing voice, “Until this moment, Senator, I think I never really gauged your cruelty or your recklessness…” When McCarthy resumed his attack, Welch interrupted him: “Let us not assassinate this lad further, Senator. You’ve done enough. Have you no sense of decency, sir, at long last? Have you left no sense of decency?”

This was one of the first Congressional hearings ever to be televised, and it exposed the Senator for what he was — a shallow, irresponsible, arrogant power-seeker who was willing to destroy other people in order to gain the limelight.

In like manner there are hyper-critics within Christianity today who are yelling “Apostate! Apostate!” over matters that really amount to nothing. If a person speaks to a group they disapprove of, they label him an “Apostate.” If he has a different viewpoint from theirs about a non-essential doctrine, he is branded an “Apostate.” If he compliments someone they don’t like, he is relegated to Hell as an “Apostate.”

An Appeal for Sanity

Grant Phillips, a Bible teacher in Kentucky who has pastored six churches in his lifetime, recently responded to the hysterical critics of Jonathan Cahn with these words:

Look folks, many of us need to… stop nitpicking everything the Lord is trying to tell us and just listen to what He is saying in whatever manner He chooses to say it. Even in my own experience of writing articles, every now and then, someone emails me who just wants to nit-pick at something I wrote while missing the message of the article. The phrase comes to mind, “They’re so heavenly minded, they’re no earthly good.” We need to humble our hearts and stop being so self-righteous.

In my personal correspondence with Jonathan Cahn, I have discovered that he has a very Christ-like spirit and a great sense of humor. In responding to his critics, he has killed them with kindness, refusing to respond with the same invective they have used in attacking him. He has dealt with issues and not personalities.

And his sense of humor has helped him to put the criticism in perspective. Let me give you some examples:

The nit-picking, Pharisaical hyper-critics of Christianity need to be reminded of the wisdom of Gamaliel which he shared with the Sanhedrin Council when they arrested Peter and the apostles and desired to kill them (Acts 5:29-33). Gamaliel stated that if what the followers of Jesus were teaching was false, nothing would come of it. “But if it is of God, you will not be able to overthrow them.” He then added, “You may even be found fighting against God” (Acts 5:38-39).

The pit bulls of Christianity can growl and yap and snarl all they please, but anointed messengers of God like Wilkerson and Cahn will prevail because they are speaking the truth. I stand with them, and I am proud to do so.

Together with them, I cry from the depths of my heart, “Wake up America! You are blaspheming the very God who blessed you. He has sent prophetic voices and remedial judgments to warn you and call you to repentance. What will be your choice? Repentance or Destruction?” 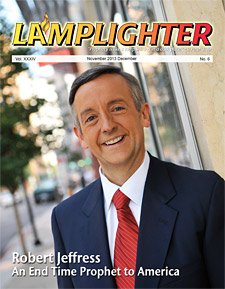 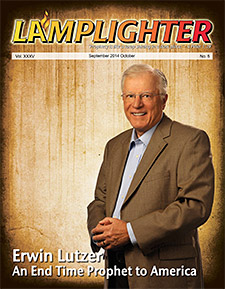 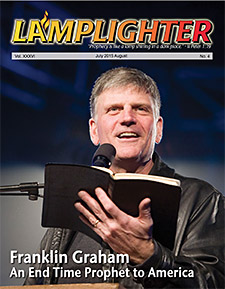