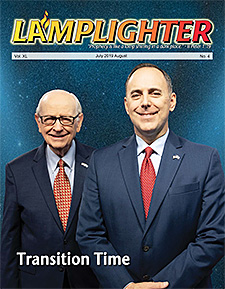 What do Moses, David, Elijah, and Paul have in common? They were all great leaders called of God to serve in tremendously important roles. Irreplaceable in their own right, God nevertheless raised up men to follow in their footsteps. And, at some point in their lives, each one of them recognized the need to cultivate and mentor a successor. Moses prepared Joshua, King David equipped Solomon, Elijah trained Elsha and Paul mentored Timothy. Likewise, Jesus carefully prepared His disciples to succeed Him as teachers and preachers.

Since 1980, David Reagan has faithfully acted on insight the Lord gave him. That was the year he launched Lamb & Lion Ministries to proclaim the soon return of Jesus Christ. For the first several years, Dave spoke primarily in Texas and nearby states. He ran the ministry out of his home — with minimal assistance or support. A gifted speaker, his sermons and teaching lessons were distributed by cassette tape. Eventually a mimeographed newsletter was produced to inform interested supporters about prophetic happenings.

Over time the ministry outgrew Dave’s home into rented office space and then into a transformed farm house. The staff grew from a couple of faithful folks to a team devoted to producing not just the bi-monthly Lamplighter magazine but also a regular stream of books and other publications. The cassette tapes gave way to DVDs and professional television programs that are broadcast into millions of homes around the world. Today, through our growing Internet presence, Lamb & Lion is accessible to hundreds of millions if not billions of people.

Who can step into the shoes of someone called of God to serve in such an impactful way? Who is worthy to be a voice crying in the gathering darkness that the Lord of Light is about to burst from the heavens? Like Joshua, Solomon, Elisha and Timothy before me, I am overwhelmed at the weight of my calling to replace David. Paraphrasing Solomon as he followed in the footsteps of another David, I have prayed, “O Lord God, give me now wisdom and knowledge, that I may go out and come in before this people, for who can lead this great ministry of yours?” (2 Chronicles 1:10-11).

Some of you reading this magazine have been Prophecy Partners and ministry supporters for many years. Others have come alongside us more recently because God’s Prophetic Word stirred an excitement in your heart. All of you joined the effort to tell the world that Jesus is coming soon — glorious good news for believers and an urgent warning to the lost. Your encouragement, support and prayers have been multiplied over the years as God has poured out blessings through Lamb & Lion Ministries into countless lives.

For those who have identified Lamb & Lion Ministries with David Reagan, let me say that I too know God has worked in a mighty way through this passionate servant. I love him as a father, respect him as a mentor and honor him as an exemplar. His love of Jesus Christ and dedication to the message that He is coming soon has not diminished in the least. In fact, David reminds me of my own son’s biblical namesake, Caleb. Even at eighty-five years old he was still strong and eager to conquer the land he was promised.

But like those other great leaders, David Reagan has realized that if the Lord delays His coming, another man must assume the mantle of leadership at Lamb & Lion Ministries. He made me aware that I was his preferred successor some time ago. After our board independently and unanimously affirmed my selection, I have sought counsel from respected leaders who have successfully undergone transitions in their ministry.

Above all, I have sought the Lord. My other fervent prayer has echoed that of Elisha, who asked for a double portion of the spirit that had filled Elijah. Elijah told him it would be a hard thing, but wisely advised that God would determine whether the request would be honored — and would indicate this by whether Elisha witnessed Elijah’s ascent to Heaven. Given David Reagan’s passion and giftedness, I would be filled to overflowing with just a half-portion of his spirit!

This will be a slow-motion transition. Over the next two years, David will be mentoring me to assume all his responsibilities. I will spend more and more time at our ministry headquarters, even as I travel and speak more often. I will continue to lead our pilgrimage trips and take on increasing responsibility for our print and media outreach. Our entire staff will remain committed to the message that Jesus is coming soon. Through it all, I will continue to honor the man who has been the Lord’s anointed as the leader of this ministry for over 39 years. Like Paul, David Reagan has certainly “loved His appearing.”

In closing, please know that I welcome your prayers. Even Joshua and Solomon had to be admonished to be strong and courageous when the mantle of leadership actually passed to them. If anything, I’d ask that you pour out a “double portion” of prayer for me and Lamb & Lion Ministries through this transition period!